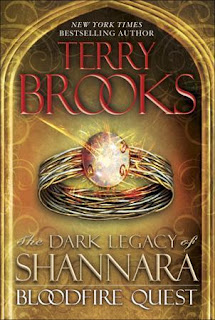 Alright, continuing with the Dark Legacy of Shannara, I just finished Bloodfire Quest.  And I have to say, this book was a ton better than Wards of Faerie.  Wards of Faerie was the setup book where honestly not a whole lot happened.  Bloodfire Quest is sort of just jumping into everything.

As we learned in Wards of Faerie, the Ellcrys is dying, which is why the Forbidding is failing (and how half of the Druid's Quest for the Elfstones got into the Forbidding because there are holes appearing).  The Ellcrys has chosen Arlingfant Elessedil is the one who will succeed her.  Arlingfant wants nothing to do with this.  But she meets with the Ellcrys every night to talk about such things; the Ellcrys understands completely because she didn't want to be the Ellcrys either (I'm pretty sure that this Ellcrys is Amberle from The Elfstones of Shannara).

When Aphenglow hears that the Ellcrys is dying and that her sister is the chosen successor, she drops everything to both restore the Ellcrys and try to get her sister out of succeeding the Ellcrys.  That involves a journey back to Paranor to check the Druid Histories for clues as to where the Bloodfire is (luckily Allanon made a note of it).  The sisters return to Arborlon to tell their grandfather what is happening and obtain the Blue Elfstones to help them find the Bloodfire).

Inside the Forbidding, the Straken Lord Tael Riverine has captured Khyber Elessedil and Redden Ohmsford.  He is readying his forces to conquer the Four Lands in search of Grianne Ohmsford, who he still wants (100 years later) as his straken Queen.  He challenges Khyber to a duel - if she wins, the two will go free.  If she loses, she will die and the Straken Lord will do what he wills with Redden.  She ultimately loses.  Redden is left alone in a cell until being brought along with the Straken Lord's army, presumably to the boundary of the Forbidding.  Oriantha, the shapeshifting daughter of one of the druids, remains in the Forbidding as well (but is free at this point, trying to save Redden).

The remaining party which is made up of the Gnome Tracker, Railing Ohmsford, Mirai Leah, Seersha the Druid, Woostra, and Crace Coram have decided to look for Grianne Ohmsford.  Crace Coram was in the Forbidding and brought word of the Straken Lord's plans.  Everyone believes she has been dead for 100 years, but they decide to look into the Druid Histories and Khyber's journal for any clues as to what happened to her.  They discover that Grianne's journal was given to the Ohmsford family, and so is in the care of Railing's mom.  Mirai distracts his mom while Railing sneaks into the house to retrieve the journal (Railing's mother would flip if anything happened to her sons, so they don't want her to know that Redden is stuck in the Forbidding).  The journal luckily does tell them where she is.  On the night before they are going to set out to find her, Railing is visited by the King of the Silver River, who gives him a mysterious ring and some advice (specifically that Grianne Ohmsford has been an aerid for 100 years - if they succeed in bringing her back, she will not be the same person she was 100 years ago.  Railing thinks hard about this advice for the remainder of the night, but decides not to say a word to the others.  And so they are setting off the find Grianne.

Meanwhile, Aphen, Arling, and Cymrian have set out looking for the Bloodfire.  They are followed and attacked by a Federation airship, crash landing.  The assassin Stoon is commanding the other vessel; he was given weird mutants to help him deal with Aphen.  Stoon is upset with this entire mission because he is an assassin, not a tracker.  He sends the mutants to go and kill the elves.  There's an awesome and tense tracking and fight scene where Cymrian takes on the mutants.  He almost gets killed because Stoon is there too, but Stoon misses an attack and hits one of the mutants, making them turn on him, too.  Cymrian was buying Aphenglow time to heal her sister, who almost died in the crash.  Aphenglow arrives in time to stop Stoon from killing Cymrian (who she now knows loves her, and she finally decided she loves him, too).  After killing Stoon, she heals Cymrian and they fall asleep exhausted.  They wake up to find Arling gone.  A random couple happened on Arling and brought her to the Federation airship for some bizarre reason.  The guy took the Ellcrys seed off of Arling (but no one else knows that right now).


I have to say, I liked Bloodfire Quest a lot more than Wards of Faerie.  Wards was honestly really boring because it took them so long to get going anywhere.  There were parts of Bloodfire that I wasn't as fond of (honestly, I'm most interested in Aphen's Quest right now; the stuff going on in the Forbidding has been pretty boring because it's mostly been people sitting around in a cell).  But people were mostly off doing stuff, trying to deal with everything they've gotten themselves into.  The Federation also makes me laugh, because in attacking Aphen's ship, they could quite easily doom the Four Lands to be overrun by demons from the Forbidding.

So that's where Bloodfire Quest leaves off.  Absolutely everything is a mess and will have to be resolved in the final book of the trilogy, which I am quite looking forward to reading.
Posted by Shauna at 4:14 PM