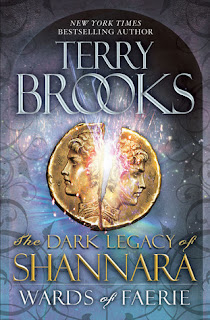 It's been a long time since I've read a Terry Brooks book.  Back in 2008 I read the Genesis of Shannara trilogy, then in 2012 I read the Legends of Shannara duology.  Both of those series bridged the Word and Void trilogy with his other Shannara books.  All the other Shannara books I've read prior to starting this blog.  I think it was the trilogy before Genesis of Shannara, the High Druid of Shannara, that was the last series I read as they came out; in the year between book two and three being published, I forgot a huge chunk of what had happened (but didn't realize that was so until I started reading book three and got super confused by what was going on in the first chapter).  So since that time, I've been hoarding trilogies and other series as best as I can so I can read them one after the other.  The Dark Legacy of Shannara is no exception; I've had it since it was published, but didn't get around to reading it until now (although honestly I wanted to long before now.  Every time I thought I had a weekend to devote to reading the trilogy, obligations came up that I couldn't ignore).  I have been rather excited to read the Dark Legacy of Shannara because I knew it was going to involve a quest to find more Elfstones.  Other than the Blue Elfstones (and the odd random other ones like the Black Elfstone), the others have been lost to the world for millenia.  Everyone has believed they were gone forever.  Until now.

The granddaughter of the elf king, Aphenglow Elessedil has chosen to become a Druid.  She got her grandfather's permission to search through the Elven histories, looking for clues to help her and the other druids uncover lost magic.  She finds the diary of a long gone elven princess.  Aphen almost dismisses the diary as probably everyone else before her has, but flipping through to the back she finds the princess make mention of the missing Elfstones, and how they were taken from her by a Darkling boy.  Aphen is attacked not long after this discovery, which convinces her to return immediately to Paranor.  There the Ard Rhys is awakened and the Druids decide to embark on a quest to find the missing Elfstones.

The current Ard Rhys, Khyber Elessedil, goes to the Hadeshorn to speak with the dead in the hopes that they will give her clues as to the Elfstones' location.  The shade of Allanon speaks to her, warning her that this is a very dangerous undertaking.  He provides her with what help he can (all the while cautioning her heavily - he even says that she will curse him by the end of this expedition).  He also cautions that they must have an Ohmsford with them if they want to have any hope of success.

Meanwhile, Aphen returns to Arborlon to ask her Grandfather if she can borrow the Blue Elfstones to help them on their quest.  The king agrees to let her use them, with the stipulation that she can only use them once and while still in Arborlon.  After using them she is attacked again and almost killed.  Luckily she has recently hired an Elven tracker named Cymrian as a protector.  Aphen escapes with a broken leg.

Back at Paranor, the Ard Rhys decides that Aphen cannot go with them due to her leg.  Khyber skives the memory of what the Seeking Stones have shown Aphen, then sets off with most of the other druids to start their quest.  She recruits twin boys Redden and Railing Ohmsford, as well as Marai Leah, to help with her quest.  They must go deep into the uncharted northern parts of the Westland, following the landmarks shown by the Seeking Stones.  Khyber also recruits a seer who is the only man known to live in those lands as a guide.

The Federation decides to show up at Paranor once the Ard Rhys and most of the other druids are gone.  They had snuck someone into the castle earlier who was instructed to fire a weapon at the Federation airships, giving the Federation the okay to attack the Druid Keep.  The Keep itself responds to the attack, defending itself.  From here, the Federation's inside man opens a door into the Keep, causing the Druids to retreat into the inner parts of the castle.  The Federation sieges as best as it can, having to be careful that the Keep's defensive wards will not be activated.  They start tunneling under the walls, prompting the Keep to desperately try to summon Aphen to its magic.  From there, Aphen okays the Keep clearing out the invaders; she has only a little time to get her people out before the magic attacks (it will attack either everyone or no one).  They succeed in getting an airship and getting out of there just in time; one of the other druids, her lifepartner, Bombax, is fatally wounded though.

Meanwhile, the Ard Rhys and company keep getting attacked by strange creatures their seer guide has never seen before in the area.  They lose many of their troll protectors and Railing's leg is broken in the attack.  The twins are separated as a result; the Ard Rhys insists that Redden must come with her even though he does not want to leave his brother.  They find what looks like a waterfall that leads to a tunnel.  Going through it, they find themselves stuck on the other side when a dragon attacks.  It is only in the aftermath of the dragon that the Ard Rhys realizes the truth - they are in the Forbidding.

So yes, that was Wards of Faerie in a nutshell.  There was a whole lot of build up for honestly a whole lot of nothing happening.  Sure, Aphen got attacked repeatedly.  But the Federation had no idea what she had found, only that she seemed to have found something.  There was some political things that happened with the Federation, but it was a bit all over the place (and some of it felt a bit unnecessary).  It took until chapter 20 for the Ard Rhys to finally find the Ohmsford twins and ask them to come with her (there are only 31 chapters in this book - so the quest felt like it FINALLY got going over half way through the book).

I also have to say, the names in this book were a bit ridiculous.  I know, I know, it's a fantasy book.  But I've read a lot of Shannara books, and I have a feeling for what the names should sound like.  Aphenglow was weird.  So was her sister, Arlingfant.  Bombax was a bit off.  And so was Railing Ohmsford.  I think the worst was the elven king, Emperowan.  These all really felt like Brooks was running out of ideas for character names, which was unfortunate.

But once I got over the long slow build up and the names, I have to say, there were some interesting things going on in this book.  This is the first Shannara story where Allanon was literally telling them maybe you shouldn't go (but they went anyway).  This was also the first time we got to see Paranor attacked (and how the Keep was able to defend itself).  So that was really cool.  I remember being a bit disappointed with how things worked in the Forbidding in the High Druid of Shannara series, but I'm hopeful that we'll see some more interesting things there in the other two books (especially since this time there's a bunch of people who hopefully won't be captured right away the way I vaguely remember Grianne Ohmsford was).  So while I wasn't a huge fan of this book, I am looking forward to the next two in the series.
Posted by Shauna at 9:40 PM