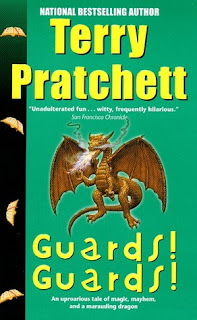 Waaaay back in 2009, a couple of friends recommended that I give three different Discworld novels a chance after I read The Colour of Magic (twice!) and The Light Fantastic.  The three novels that were recommended to me were Reaper Man (which I read in February 2009), Wyrd Sisters (which I read in July 2009), and Guards! Guards! I'm not proud of it, but it's taken me EIGHT YEARS to finally get around to reading Guards! Guards!  I've picked it up a few times, or moved it to the top of my reading pile.  But it always gets shoved back for some reason.  Well, no more.  Over the weekend I finally sat down and actually READ the thing!

Guards! Guards! is the first book about the Night Watch of Ankh-Morpork.  There's Captain Vimes, the drunken leader of the Watch.  His second in command, Sergeant Colon.  Corporal Nobbs, the opportunistic thief ("the door just happened to be open, honest" sort of thief).  And Carrot Ironfoundersson, their new recruit.  Carrot is a massive man who was raised by dwarves - his dwarven father sent him to Ankh-Morpork to make a man of him.  Carrot is the only one of the bunch who believes being a member of the Night's Watch is a worthy occupation (almost everyone else in the city, including the other three members of the Watch, think the Watch is useless).

A secret society is plotting against the Patrician (the ruler of Ankh-Morpork) - they've decided to summon a noble dragon to terrorize the city a little bit, then set someone up to conveniently proclaim himself descended from the old kings of Ankh-Morpork and slay the dragon.  But things go a bit wrong and the dragon ends up crowned king instead!  And only the members of the Night's Watch, with the help of the Librarian of Unseen University (who happens to be an ape),and Lady Ramkin (who happens to breed swamp dragons), are ready to risk being burnt to a crisp to dethrone the new monarch.

I know it's been almost a decade since I last read a Terry Pratchett novel, but I honestly think Guards! Guards! was my least favourite of the three Discworld books that were recommended to me.  I found the book a bit hard to get through, especially since about half of it seemed to be the set up for the latter half (the dragon wasn't crowned king until over halfway through the story!)  The most entertaining thing about it was Carrot, who took his duties seriously (he read the law book of Ankh-Morpork and would be constantly quoting it while arresting people.  Plus he was a crazy dwarven-trained machine who could defeat basically whole armies while trying to arrest people. Oh and every here and there you'd get a letter written from him to his dwarven parents.  He was fun!)

Vimes was a bit of a tough sell to me.  I was not a fan at all at the beginning.  But the way he played off other characters (specifically trying to reign in Carrot) was fun.  The other two members of the Watch were just okay in my mind.  They were fine, but they seemed much more like stereotypes than characters to me.  Lady Rankin was pretty fun though.  :)

So yeah.  This was not my favourite Discworld novel.  But I think it was better than The Colour of Magic and The Light Fantastic, so that's something.  I doubt I would recommend Guards! Guards! to anyone though.
Posted by Shauna at 10:14 PM