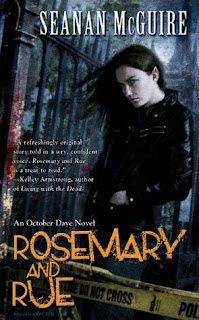 I heard Seanan McGuire speak at 4th Street Fantasy several years ago.  I looked up her books afterwards and they sounded interesting, so I grabbed Rosemary and Rue, the first book in her October Daye series.  I finally got around to reading it now.

Rosemary and Rue opens with this really intriguing prologue.  October "Toby" Daye is a private investigator who just happens to be a changeling (a half human-half faerie).  She's tailing her only suspect in a kidnapping case (the wife and daughter of her liege lord and friend have disappeared).  The suspect (her liege's brother) gets the better of her and turns her into a koi fish.The prologue ends with Toby saying that the koi pond "was my home now, the only one I'd know for fourteen years."

So that was a pretty cool hook.  Unfortunately, chapter one opens with Toby working at a grocery store fourteen years and six months later; the curse had been broken somehow six months earlier, and she was trying to put her life together.  Her husband and daughter wanted nothing to do with her (they believe she left them fourteen years ago).  And Toby wants nothing to do with the faerie world because it caused all of this.

I say this is unfortunate because I thought it would be fun to see what happened - how the curse was broken, who broke it, etc.  But nope.  Skip ahead.  McGuire gives details a bit later in the narrative, but it's not very satisfying.

Anyway, a faerie noble, the Countess Evening Winterrose (who happens to be the only one Toby is really speaking to) is murdered.  Before the murder, Eve calls Toby and lays a binding on her, so that Toby must discover who the murderer was or else she will die.  This forces Toby back into the world and life she left behind.

While Toby is much weaker than her mother, she inherited her mother's ability to taste blood and relive the blood's memories.  It's pretty neat.  She does this pretty early in the story (going to Eve's murder scene to learn what she can).  There's a part later in the story where Toby (and a couple of other changelings) is attacked and another fae, Tybalt, saves her.  Tybalt gets the attackers blood all over everything (including his shirt).  It was obvious to me that Toby could discover who had hired the attacker at that point.  And it was obvious to her too: she tried to tell Tybalt that, but he shooed her away (to be fair, she had almost died a couple of times - the attacker had shot her with iron, which had almost killed her.  Then the same attacker was waiting for her when she was leaving the Japanese Tea Gardens where her friend, Lily, had managed to heal her).  But then there was about 100 pages of Toby checking out random leads before FINALLY going and getting Tybalt's shirt to discovered who had hired the guy.

The culprit was a bit surprising in some ways.  It was her changeling friend/old mentor Devin.  Devin had been friends with Eve, but she had a Hope Chest, which has the power to turn changelings into either full humans or full faerie, whatever they wish.  Devin wanted it to live forever.  So he killed Eve, and kept sending random people to go and kill (or torture then kill) Toby to stop her from getting the chest (or find out where she had hidden it).  The weird thing about him doing it is that he kept sending kids who had no idea about his plan to hang out with Toby.  Or like he would patch up Toby, then send a Doppelganger in to torture and kill her.  Or he called in a huge favour to heal her from iron poisoning, then turned around to murder her (this was really, really weird.  It would have made more sense if ANYONE else in the book had called in the favour instead).  These were really, really weird moments.  I guess he was wanting Toby to back off from the investigation and kept asking her to - it was only when she kept saying no that he'd send more things to murder her.

Other than these plot issues (this and the weird prologue to chapter 1 time gap I mentioned earlier), I really enjoyed the book.  And to be fair, this was McGuire's very first novel.  So I would be interested in reading more from her (and more October Daye) in the future. :)
Posted by Shauna at 7:07 PM