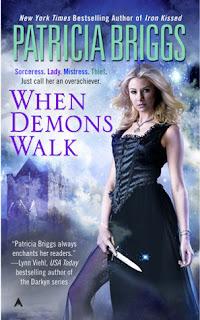 It's been far too long since I've read a book by Patricia Briggs. I was bingeing on her books back in 2009. But then I started hoarding them for some reason instead of reading them. So I finally grabbed When Demons Walk off my shelf yesterday because it is a standalone book. I very quickly remembered why I liked her books so much as I very nearly finished the book last night (I very nearly didn't get any sleep in favour of finishing it - luckily I did stop to get a few hours of sleep).

When Demons Walk is the story of Shamera, a thief and mage who lives in the bad part of town. After several people, including her mage master, are killed, she is enlisted by Lord Kerim, Reeve of Southwood, to find the killer. Though Sham is not fond of the Easterners who conquered her city (and killed her family), she agrees to help find the killer to avenge her master. She poses as Kerim's mistress so she can enter the court and hopefully find the killer there. While the Easterners do not believe in magic, Sham and the other people of Southwood do; while Kerim does not believe it is possible, Sham knows they are hunting for a demon. It will take all of her magical power(and a good deal of luck) to find and defeat the demon.

I really liked Sham. She was smart, funny, and very capable as a heroine. As someone who grew up in the Court, she was able to blend in really well (and had a lot of fun playing the mistress who fawns over her lord). Her relationship with Kerim was quite a lot of fun with the two of them joking and teasing each other all the time (yet acting for everyone else around them). Quite honestly, a lot of the characters were fun. I loved the Shark and Dickon almost as much as Sham and Kerim.

I waan't a huge fan of the book's ending though. I felt like Briggs deliberately withheld details of the plan until they were happening to keep the reader in suspence.

All in all, while I enjoyed reading When Demons Walk, it wasn't my favourite book by Briggs (it's quite possibly my least favourite, which is saying something about her writing - my lease favourite book was still one I didn't want to put down!!!) But if you want to read a better book from her Sianim series, go with Steal the Dragon or Masques instead.
Posted by Shauna at 1:57 AM