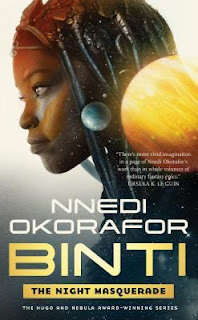 Well the library doesn't have the last book in the Binti trilogy, so I bought it on my Kindle and read it right away after finishing Binti: Home.  Unlike the time lag between the first two books, Binti: The Night Masquerade takes place pretty much right where Binti: Home leaves off.

Binti and Mwinyi return to her home to find the building burnt to the ground (and several nearby homes damaged as well).  She discovers Okwu has hidden in the lake and has called reinforcements.  So she calls on the elders to meet with her and asks them to invoke Himba deep culture over the Khoush and Meduse to make peace once and for all.  The elders agree.  But at the time of the appointed meeting, the elders do not appear.  So Binti is left to invoke the deep culture on her own.  Amazingly, thanks to her Meduse DNA and the alien technology she has recently awakened, she is able to invoke deep culture on her own.  The Meduse chief and Khoush king agree to peace.  But one of the Khoush king's underlings fires on the Meduse, restarting the war anyway.  Binti is hit in the crossfire and dies.

The war heads to space, leaving the Himba behind.  Mwinyi discovers that Binti's family is safe - they were sheltered in the living root of an Undying Tree (a root that was part of their home's foundation).  Mwinyi and Okwu ask if they can take Binti's body to Saturn because that's where she was going to next thanks to a recurring dream she kept having with her mysterious alien artifact good luck charm.  The Himba have a funeral for Binti, then a newly born spaceship fish (the spaceships in this world are animals - this fish is the daughter of the fish Binti has been travelling in up to this point of the story) arrives to take Mwinyi, Okwu, and Binti's body to Saturn.  But when they arrive at Saturn, Binti is miraculously brought back to life.  It seems that the microbes in New Fish were able to do it *somehow* because New Fish was just born.

So they all travel back to Oomza Uni where Binti gets to learn about her crazy genetic makeup (and that she can only go 5 miles on land away from New Fish; New Fish can go 7 miles up).  The end.

I found myself disappointed by the ending of this series, even though I kind of had a feeling that Binti was somehow going to come back to life (her death was around the halfway point of the third book).  Binti's death was written very well.  And while she may not have succeeded in ending the war, she brought together two human tribes who looked like they were going to work together in the future.  When she was brought back to life, it just felt like the narrative was cheapened (especially since it really did feel like "space magic brought her back to life." Oh, and she refused to talk to her family right away to let them know she was still alive - that seemed selfish in the way that her siblings accused her of being all through Binti: Home).

All in all, the Binti series is an interesting read.  If you love worldbuilding, you will enjoy a lot of aspects of this book because that is very much its strength.  But if you're looking for a deeper narrative (and a more fleshed out book), you should probably give these books a pass.
Posted by Shauna at 1:29 PM