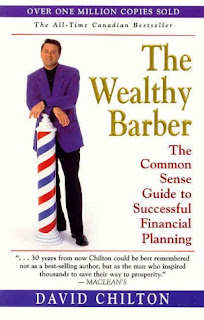 I've been reading some disappointing fiction lately, so I turned back to nonfiction (and specifically back to personal finance books).  I think it was Preet Banerjee who spoke really highly of David Chilton's The Wealthy Barber: The Common Sense Guide to Successful Financial Planning, so I thought I'd give it a read whenever I got a chance.  Barry Choi noted on his list that it's a bit dated, so I wasn't really sure what I'd be getting.

The Wealthy Barber is told as a conversation between three young adults and the title's wealthy barber. When one of the young adults, Dave, asks his father for financial advice, his dad directs him to his barber friend, Roy; it was Roy who taught Dave's father all he knows.  Dave, his sister, and his best friend end up going to Roy's barber shop every month for seven months; while the two boys get their hair trimmed, Roy imparts his wisdom on them.  The topics include saving 10% of what you earn for future wealth, insurance, saving for retirement, home ownership, general savings, investments, and a few other miscellaneous items like savings for your children's education.

This being the sixth book on personal finance that I've read, some of Chilton's advice was familiar to me.  But I still got a few new tidbits for which I am quite grateful for.

The major issue I had while reading The Wealthy Barber was that I got really annoyed with Chilton's three younger adults at the beginning of the book.  They kept interrupting Roy as he was explaining things with random questions (yes the questions were generally on topic, but there were a number of times when I thought "shut up and let the man speak!!!")  Once you get through the first few chapters this sort of disappeared though - the three young adults were learning and answering more on point questions (or maybe I was just used to it?)

While The Wealthy Barber is a bit dated now (there's no talk of TFSAs, and from what I've gathered his talk of mutual funds is out of date), with its unique conversational structure, I think it's still a great book to read if you're new to personal finances and need some help getting started.
Posted by Shauna at 1:54 AM