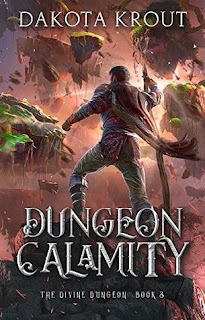 Book 3 of Dakota Krout's Divine Dungeon series sure took some crazy turns!  Dungeon Calamity opens with Cal being brought back to himself by a mysterious man who wants his "whispers" back.  The man was surprised that Cal even answered when he spoke to him, but with that settled, the mysterious man left the dungeon.  Cal's goblins, the Bobs (the Bobs are specifically clones of his original Goblin Shaman) are overjoyed that he's back - a month has passed and Cal went decidedly insane.  He was throwing crazy traps and mobs against adventurers and failing to clean anything up. Terrified that this reprieve from madness will be short lived, Cal starts making plans to go and find Dani.

To that end, Cal starts extending his influence downwards, looking for the molten centre of the planet.  He also gets the Bobs to help him start a new ritual which sets ley lines through the planet.  Finally, Cal fights his way into the Mage ranks, managing to tie himself to the most powerful concept in the process (the one that all the other ones originate from).

With Dale being his usual unhelpful self, and Cal losing contact with Minya, he embarks on his most daring adventure yet: controlled flight.  Using a gyroscope, he manages to get the mountain into the air and headed off to save Dani!

For his part, Dale was kind of doing more of the same.  Embroiled in the local politics, he manages to get a training school up and running in Mountaindale (that's the name of his new city).  The school is meant to be a place where people of all races and nations can gather to train, hopefully politics-free (although everyone is aware that they probably won't be able to keep all politics out).  He continues training with his Dark Elf teacher (and manages to piss his teacher off, so his teacher is now attacking him wherever and whenever).  But then when the nations of the world are attacked and decimated by a necromancer calling himself "The Master," Dale finds his and Cal's goals suddenly aligning.

Dungeon Calamity was in many ways different from the other two books, mainly because Cal was without Dani (which was sad).  But it was full of really fund moments (and culminated in a crazy ending that I didn't see coming).  I'm looking forward to reading book 4! :)