Masters of the Universe: The Shard of Darkness (reread) 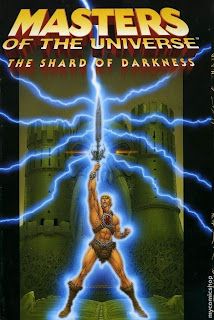 I first read Masters of the Universe: The Shard of Darkness over ten years ago.  At that time, I felt that it really starts in the middle of the story, and that you're missing what happens first.  While that's still true, with Man-At-Arms and Prince Adam initially discussing the new-found powers that Prince Adam now had responsibility of, I didn't feel like it was a problem.  Most people reading this would already know Prince Adam is He-Man, so why wouldn't he have to figure things out once he newly has his powers?

When they're called to deal with a minor emergency, they discover that Orko has found the Shard of Darkness, a piece of the Shakarran Crystal, which the Eternian Elders had used to contain an ancient evil long ago.  The Sorceress tasks He-Man to journey alone to find the remaining shards that remain on Eternia so that they can be banished from the world.

Meanwhile, Evil-Lynn is also after the Shard of Darkness.  She plans to use its power to overthrow Skeletor and take over the world in his place.  To that end she has enlisted the help of Trapjaw and Tri-klops.

I have to say, I liked this a lot more this time!  While the story is relatively simple, it still fits really well with the Masters of the Universe.  I liked how Skeletor's henchmen (and woman) were all backstabbing each other (often without you ever really sure who was backstabbing whom!) And I really liked that He-Man was unsure of himself and his powers, yet still manages to overcome great odds, even as Prince Adam.

One thing that I found particularly interesting this time around was the Sorceress.  I've always thought of her as a caring and somewhat motherly figure.  But she seems quite cold here, trusting to prophecy without explaining herself to Man-At-Arms and He-Man.  I'm interested to see if the series will continue and have her grow, as well as Prince Adam?  Well, only one way to find out - I'm reading Volume 2 next!