Masters of the Universe: Dark Reflections 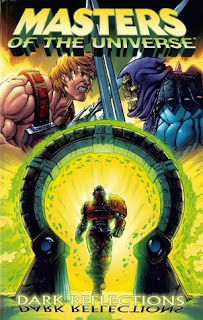 Masters of the Universe Volume 2: Dark Reflections opens with the Masters trying to stop Skeletor from entering a tomb.  Unfortunately they are too late and Skeletor finds what he is looking for: the Elixir of Schneidor.  He plans to use the elixir to open a dimensional gateway into Castle Grayskull.  But the Masters of the Universe follow him to Grayskull in the hopes of stopping his plan.  Man-At-Arms attempts to disable the gateway Skeletor and his forces have constructed, but a blast from Skeletor knocks him through the portal, which was damaged in the fight; Tri-klops says there is no knowing where the portal may lead.  Skeletor decides to destroy the portal as it's no longer useful to him, trapping Man-At-Arms inside.  But after Skeletor leaves, the portal somehow opens once again, ejecting a comatose Man-At-Arms!

The Masters rush him back to the capital.  Meanwhile, Stratos arrives, seeking aid: mysterious blasts are destroying the city of Avion!  He requests the aid of Man-At-Arms, but since he is still comatose, He-Man and Man-E-Faces are sent in his stead to try to figure out what is happening.  While they're gone, Duncan awakens, claiming he needs to speak with King He-Man about the rebels.  After being restrained, he breaks free and makes his way to Castle Grayskull, determined to find King He-Man and stop the so-called heroes led by Keldor.

This is a really fun story with dimensional travel that makes me think of He-Man and the Masters of the Multiverse (which I apparently forgot to write about reading on here back in April - I'll have to remedy that, perhaps with a reread because it was so good!) I knew Man-At-Arms was going to end up being evil (you can just tell from that cover art!) but it didn't matter, the story was still really good.  It's unfortunate that these graphic novels don't seem to be a connected story (which I was expecting since they are volumes 1 and 2 by the same creative team), but that's okay, they're still fun reads.  They're also making me want to re-watch the 2002 show (which I have watched since I originally read The Shard of Darkness back in 2010 - it's super good!)