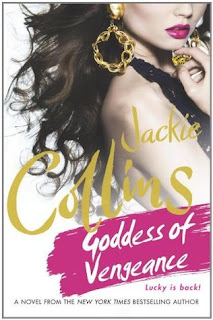 I found Jackie Collins' Goddess of Vengeance at the library the other day. Reading the cover, it sounded rather like a Sydney Sheldon book, so I was quite excited to give it a read!
I didn't realize it at the time, but Goddess of Vengeance is the like 8th book on a series about Lucky Santangelo, so there were a lot of characters who had history that the book kept referring to. But I thought the book did a pretty good job of letting a reader like me who hasn't read anything else in the series know what was going on.
So in Goddess of Vengeance, Lucky is the owner of The Keys, a fabulous hotel in Vegas. She has wonderful children and a fantastic husband who she loves very much - life is good.
Enter Armand Jordan. Armand is a wealthy prince from a Middle Eastern country. He believes women are nothing more than playthings and takes great delight in humiliating them. He has set his sights on owning The Keys, and cannot believe that Lucky, a mere women, refuses to sell (honestly he was quite appalled that she wasn't just the figurehead he assumed she was).  He takes her refusal quite personally and is hellbent on getting revenge against her and obtaining the Keys, no matter the cost.
Lucky also has some children doing stuff in the book. Her daughter, Max, is turning 18, so Lucky is throwing her a giant birthday party at the Keys. Max intends to move out on her own not long after and move to New York. But she gets involved with a movie star, Billy Melina, who is currently divorcing her mom's best friend, Venus.
And Lucky's older (oldest?) son Bobby owns a bunch of night clubs. He intends to expand his business into new cities. He's also very interested in his new girlfriend, Denver, assistant DA who is moving onto the drug unit in her city. Bobby wants Denver to come with him to Vegas for Max's birthday party so she can meet his family, but she's having second thoughts and very insecure about herself in terms of meeting all these legendary people like Lucky and her father Gino. Plus she hasn't exactly felt welcomed by Max, so she's dealing with that too.
Goddess of Vengeance was honestly not a great book. It pretty much told you over showing you anything (there were a few places where I was really excited to see what happened, like with the board meeting Lucky called. But it completely glossed over everything except for some weird preamble with a guy the book kept telling me liked Lucky).
I also had no real feel for Lucky (or honestly pretty much any of the characters - they all sounded exactly the same to me, voice-wise, with a few exceptions like Max and Armand). The book kept telling me how awesome she was, but she didn't actually do anything for most of the book. Then when she was finally going off to do something, it took forever for her to get anywhere (there were about three passages of "oh she's mad and going to get him!" "Oh, look at her go, he doesn't know what he's gotten himself into with her" etc before she finally GOT INTO HER CAR and started driving to Armand).
All in all, I found this a very disappointing read. Very unfortunate, especially since I had such high Hope's for it!
Posted by Shauna at 6:41 PM