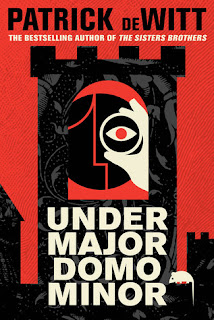 My family all read Patrick DeWitt's Undermajordomo Minor around the same time as they read The Sisters Brothers.  I remember them having a lot of debate about which of the two books was better (although they all agreed that both were good).  I was a little late to the party (with both books, though considerably later with Undermajordomo Minor), but at least I did eventually make it!

Undermajordomo Minor is the story of Lucien "Lucy" Minor, who is hired to work under Mr. Olderglough, the majordomo of Castle Von Aux.  The castle has fallen on hard times since the Baroness left, down to a staff of three (Lucy, Mr. Olderglough, and Agnes, the one-time chambermaid, now cook) serving the elusive and heartsick Baron.

Lucy begins to make a life for himself, making friends in the nearby village and falling in love with Klara, though he must compete for her hand against the handsome soldier, Aldolphus.  But that life in the castle is also shrouded in mystery: what exactly happened to his predecessor, Mr. Broom, and just what exactly is going on with the Baron?

I will admit, I had a hard time getting in to the story of Undermajordomo Minor.  I originally started reading it back in March, getting about ten pages in then stopping (I chalked it up to being super tired when I first attempted to read it).  Then a week or two ago, I reread the beginning and soldiered on through.  Though I still had a hard time with the beginning because I found I didn't like Lucy much at all.  His lies really bothered me (he was a compulsive liar and just generally didn't seem like the sort of person I'd like to hang out with).  Luckily things started picking up once he was on the train to Castle Von Aux (although there was a weird interlude about the train engineers) and met Memel and Mewe, who were quite the pair.  Oldenglough himself was very entertaining too (and right from the moment you meet him. His tour of the castle largely consisted of him pointing out rooms and saying things like "This is a room.  We don't use it.")

By the midpoint I was quite enjoying the book, but then things took a turn.  The Baroness returned, and brought guests who changed the whole tone of the castle.  Then Lucy attempts to kill Adolphus, and almost dies himself as he falls into the Very Large Hole.  He manages to escape, but everything is changes when he gets out: the Castle is drained because the Baroness left once again, taking Klara with her as a handmaid.  Adolphus died in his war, and Memel died of sickness.  Lucy goes to collect his stuff from the castle, bidding everyone goodbye, then leaves to chase after Klara.  And that's where the book leaves us.  A rather unsatisfying ending that doesn't really feel like an ending (though it is the end of Castle Von Aux and its inhabitants, who seem to be fading away).

While it's been years since I read The Sisters Brothers, I think I liked that book a lot more than Undermajordomo Minor.  Undermajordomo Minor was very intriguing, with a wonderful cast of characters.  But it just never really came together as an enjoyable whole for me, especially with the somewhat disappointing bookends of the beginning and ending.