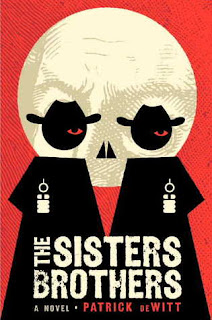 I borrowed Patrick DeWitt's The Sisters Brothers from my brother a few months ago. My entire immediate family had read it, loved it, and kept wanting to talk about it so I knew I had to read it, too (at the very least to be in on the conversation). I started reading it last week, when I was specifically looking for an easy to read book (which The Sisters Brothers definitely is - most of the chapters are super short, making it easy to pick up and put down). I didn't get very far with it last week, but ended up reading about half of it last night when my internet wasn't working. So rather than do the stuff I was originally going to do tonight, I decided to finish The Sisters Brothers instead.

The Sisters Brothers is about Charlie and Eli Sisters, a notorious killing duo of the old west. They're hired by the Commodore to kill a man who purportedly stole something from him. The brothers have to track the culprit down in gold-rush San Francisco. But of course things aren't what they seem.
The brothers are an interesting pair. The book is narrated from Eli's perspective. Eli is a good-natured and rather sweet husky man who has a bit of a temper. He loves his brother dearly and will do anything to protect him. Charlie is a drunkard who likes killing and violence; it's his fault the two are notorious gunmen working for the Commodore. They use their last name sparingly through the book, but when they do it commands immediate respect; everyone knows who they are.

The Sisters Brothers is a fun romp through the American frontier. But it's also an interesting look at making the life you want for yourself, dealing with unfavourable life circumstances, and of course the powerful bond between siblings. As I already mentioned, it's a fast and easy read. But it's also full of beautiful and vivid descriptions. I really liked DeWitt's writing style; it's no wonder The Sisters Brothers won the Governor General's Literary Award (as well as other prizes and awards).
Posted by Shauna at 12:03 AM