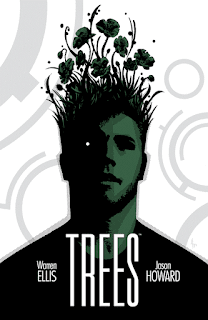 Trees: In Shadow was a really weird read. These alien tree things have descended on the Earth and have just sat, doing their thing for a decade. They don’t recognize humans as being intelligent forms of life. The graphic novel focuses on about four groups of humans, showing their lives and how they are affected by the trees. There’s a group of researchers who are trying to learn about the trees. There’s the Somalian president who wants to use the nearby tree as a staging ground to take over the neighbouring Puntland. There’s a special cultural zone in China, where people go to discover who they are (particularly their sexuality). And then there’s Cefalu, where a woman decides to take over her boyfriend’s militia with the help of an old special forces man she sees who disappears; she manages to track him down and convince him to help her learn to disappear.

I honestly didn’t care about most of the characters in Trees: In Shadow. I think the story skips around to too many places and doesn’t give enough time to develop them. But the story itself is oddly intriguing and kept me reading to the end.
Posted by Shauna at 1:15 PM