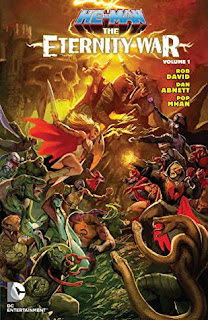 I'm a fan of He-Man and the Masters of the Universe, and have enjoyed the other graphic novels I've read, so I was very excited to read parts one and two of He-Man: The Eternity War.

The Eternity War opens with Hordak returning to life after millennia imprisoned in Despondos, Realm of Darkness.  He rejoins his Horde, who has conquered Eternia and Castle Grayskull, and sets about forging a weapon that will grant him the Power of Grayskull.  The rebels, under King Adam, She-Ra, and Teela, the new Sorceress of Eternia (who the Snake People worship as the Sorceress of their Goddess, Serpos), have taken refuge in Snake Mountain.  They plan an attack under the cover of the Dark Hemisphere's Mystic Vale, hoping to stave off Hordak's conquest of the entire universe.

Right off the bat, I once again felt like I was in the middle of the story.  What happened to the previous Sorceress?  How did Adam become King?  How was She-Ra with them?  Skeletor is reportedly dead, but how?  But whatever, I got enough information to follow along with this story.

Under Teela's counsel, King Adam (who is known to be He-Man) mounts an attack against the Horde while She-Ra is sent to locate one of the Eyes of Grayskull, the last artifacts that Hordak seeks in order to use Grayskull as a weapon against the universe.  The other one was in Skeletor's possession and presumed lost.  Man-at-Arms reprograms Roboto and heads off to space to sabotage the Horde's Orbital Disrupter.  While He-Man is victorious thanks to Man-At-Arms' sabotage, Duncan is ambushed in space by defender drones and Roboto is damaged; the two fall back to Eternia and are lost.  She-Ra is also defeated: Hordak challenges her with the Power of Grayskull.  She attempts to find the artifact, but Hordak stabs her.  But then she is rescued by an unlikely person: Skeletor!  He takes both her and the artifact to safety out from the clutches of Hordak.

Skeletor talks She-Ra into healing him, as he is still diminished from his last fight where he was presumed dead, and joining him on a journey to Despondos in order to strike directly at Hordak's power.  Unfortunately Evil-Lyn hears him tell She-Ra that when all of this is over, he wants her to heal him back to Keldor so he can start over with a new life.  Evil-Lyn flees with the two Eyes of Grayskull and delivers them directly to Skeletor!

Meanwhile, Teela shows Adam a vision of what will happen if he remains He-Man and uses an even greater power in order to defeat Hordak.  Power, when used for the best of intentions, corrupts, and that road leads Adam to be a dictator.  And so Adam makes the difficult decision to snap his Sword of Power.  Teela rejoices, saying the Goddess has been waiting for Adam because there is something special about him.  But unbeknownst to the two of them, Hssss, the King of the Snakemen, has been hiding inside of Adam.  Remaining He-Man kept him at bay, but now he is free to destroy Adam from the inside! 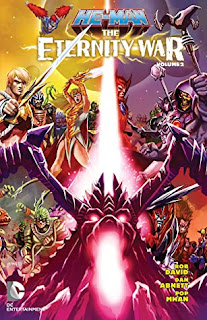 I'm not going to lie, this story really felt like it went all over the place, and was sometimes a bit hard to follow.  It really liked to flash back in time, especially at the beginning, which definitely didn't help (like when Adam and the armies were marching to battle, the story would jump back a few days to show what had happened that led to that moment, rather than just showing it chronologically.  The same thing happened when it showed how She-Ra started on her quest for the second Eye of Grayskull). There were also so many threads to the story, that at times it felt like one part was completely forgotten (although they weren't - one example of this was when Man-At-Arms disappeared after falling back to Eternia from space - that happened around the midpoint of volume 1, and we didn't get to find out what happened to him until about the midpoint of volume 2.  But at least the story eventually came back to him!)

I'm not really familiar with the Snake Men, so that didn't help either.

So all in all, I thought that He-Man: The Eternity War was just okay.  It had an interesting enough story, particularly once it got into Volume 2 and Skeletor really got going, but overall it felt like it had too many characters and plot threads that were all over the place.  The ending, after the very epic battle, also didn't feel super satisfying.  So definitely not my favourite He-Man story.  But it might be a lot more satisfying if you read He-Man and the Masters of the Universe Volumes One and Two before it.