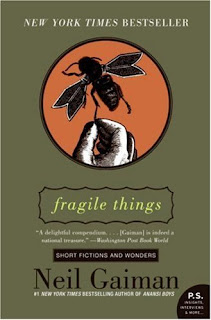 I'm really not sure why it took me so long to read this book. I've had it for quite some time, probably about a year now. I didn't read it because I wanted to save it. For what, I'm really not sure. So just before Christmas, I decided I was saving it for now.
Neil Gaiman is one of my favourite authors. I find his work fantastic, be it novels, short stories, poems or comics. Fragile Things was no exception. Most of the stories and poems were fantastc reads (that may have partially accounted for why it took me so long to read this book; I would finish reading a story, and then want to savour it).
I was talking to a friend about Fragile Things, and he said he didn't like it as much as Gaiman's last short story collection, Smoke and Mirrors. I don't exactly agree with that sentiment. They are different books with different feels to them, but they were both great. Both had some wonderful tales in them that are worth savouring. And both had poetry that I absolutely loved (The Day the Saucers Came was a particularly fun read. I'll have to try reading it out loud one day to see Gaiman is right and the poem becomes much funnier).
I also really liked reading both the introduction and the bonus interview with Gaiman that was included at the end of the book. The introduction is neat, as it explains why he wrote what he did, what inspired him, and random other facts that he thought were important (apparently the word yeti means that thing over there. I'l have to look this up later to see if it is true). Gaiman also spontaneously breaks into another story in the middle of his introductions (this was true in Smoke and Mirrors and it is true here as well). The conversation with Gaiman at the end of the book was just an enjoyable read in which Gaiman shared some facts about himself.
Fragile Things is a great read when you want something light, or something that you want a story in its entirety in just a few pages, rather than reading a novel. I thought it was a fantastic read, and I'm glad it didn't take me forever the way my last anthology escapade did.
Posted by Shauna at 5:33 PM