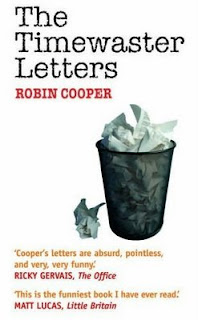 I picked this book up randomly several months ago. The back of the book sounded very funny; it seems that Robin Cooper has been sending letters to stores and different special interest groups for years. The Timewaster Letters collects all of the letters he wrote together with whatever replies (if any) he received.
The first part of the book is utterly hilarious. There was one series of letters where he was trying to sell some scarecrows made of beef. Another series of letters was about a children's book he was going to write.
But after the first several series of letters, the book seemed to grow rather stale. It was just more of the same: Robin Cooper would send an outrageous letter to a random store/special interest group, and if he received a reply his subsequent letters would get more and more outrageous. Yes, some of them are still hilarious. But by about the middle of the book you knew exactly what would happen next: Cooper would push the envelope until the second party would no longer reply.
All in all, I found this book to be exactly what I thought it would be: a timewaster. It wasn't spectacular by any means. But it is worth having in your books to pick up every now and then when you need a break from daily life.
Posted by Shauna at 2:39 PM