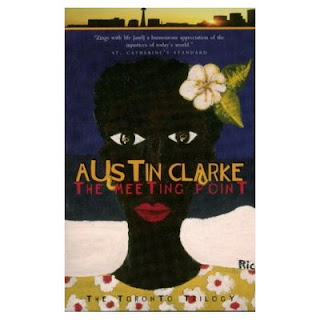 I've just finished reading Austin Clarke's The Meeting Point for Canadian Prose, and my initial judgement of the book stands: it is not the best book that I have ever read, but it is also not the worst book.
The Meeting Point is a book about an immigrant from the Barbados, Bernice Leach, who has come to Canada around 1960. Bernice works in a rich Toronto Jewish household as their housekeeper, alternating between hating and loving both the master and mistress of the house Mr. and Mrs. Burrmann. Along the way, we meet Bernice's friend Dots, Dots' husband Boysie, Bernice's visiting sister Estelle, and a whole host of other very interesting characters.
The Meeting Point reminded me a bit of Sheila Watson's The Double Hook. The plots seemed rather similar in many ways (they are both novels about specific places, the way pregnancy comes up, etc), but The Meeting Point had a lot more description; the characters of Clarke's book were very unique individuals while those in Watson's book seemed to blend together. My major problem with The Meeting Point was that it was rather slow-paced. In a way, The Meeting Point reminded me of a movie I saw recently called Bangkok Dangerous; Bangkok Dangerous was one of the slowest-paced action movies that I have ever seen. Some normally exciting scenes, like a boat chase, were incredibly boring. That's how The Meeting Point felt; things that should have been interesting just weren't, and the book seemed to drag.
So as I said earlier, this wasn't the worst book I've ever read. Watson's The Double Hook and Wright's The Weekend Man from the summer were much worse than The Meeting Point. But neither was it the best book I've ever read. Rather, The Meeting Point was simply mediocre. It has some very interesting characters and a good ending, but it tends to drag a bit. Overall, I'd say that it is worth reading, but don't expect spectacular things from it.
Posted by Shauna at 2:35 AM