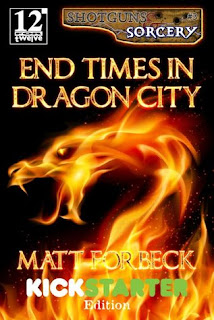 Note: this book review was originally written in a notebook on Dec 10/19 while I was on vacation last week.  I've made some minor edits to it while transcribing it.

Well, here we are: End Times in Dragon City - finished!

This book wasn't as good as Bad Times in Dragon City, although I still enjoyed it.  The problem is that the main character, Max, was stuck in prison for the first while.  And since the book is written from his perspective, nothing really happens until his friends break him out.

Let's back up a bit.  After Max killed the dragon at the end of Bad Times in Dragon City, Max was thrown into the highest level of the Garret so he could see the damage he had wrought to the City.  Freed from the dragon, the Ruler of the Dead immediately sent her armies to take out the city; her zombies are overwhelming the wall.  It's only a matter of time before she breaks through.

Eventually, Max's friends break him out of prison.  After catching him up on what's happening, Max decides they need to bolster the Imperial Guard and save the city.  But after the Guard blow up Goblintown, no one is interested in putting aside their differences in order to band together.  There's also one more problem: the dragon's corpse is decomposing in the middle of the city, a tempting target for the Ruler of the Dead.  If she gains control of it, Dragon City will be lost.

While I didn't think it was as good as the previous book, I still really enjoyed End Times in Dragon City, and thought it was a very fitting end for the trilogy.  I hope one day we'll get more of Max's adventures!

I'd also love to know more about this setting!  How did the Ruler of the Dead first come into being?  If she's been stuck on this continent, what is the rest of the world like? And what happens next for Dragon City?