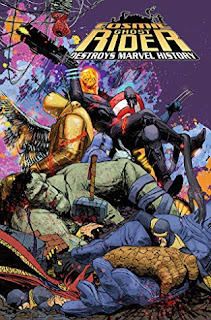 The same friend who lent me Cosmic Ghost Rider: Baby Thanos Must Die lent me Cosmic Ghost Rider Destroys Marvel History.  And oh boy is this a ridiculous ride.  After the end of the last book, the Cosmic Ghost Rider got stuck in the past.  So he decides to mess with time a bit while he waits to save his family.  The day before they're supposed to die, he shows up at their house as Uncle Freddo.  He quickly endears himself to his wife and son by telling stories of his adventures with the other superheroes, but he has a harder time winning over his daughter and younger self.

The majority of this story is Frank Castle telling his stories to his family.  He's definitely an unreliable narrator as the story he tells often doesn't quite match up with the panels we see.  But that makes up a lot of the fun, especially as the story goes on and we get to see all the crazy places and things Frank has done within the Marvel timeline.  The end of the book gives a rundown of all the stories Paul Scheer and Nick Giovannetti used for this, which was really fun to read too (hilariously, a clone story that popped up in Spider-Man: Life Story popped up here too!)  All and all, this was a really fun read as it unfolded (I especially liked the ridiculous candy story he told to tone down the violence for his kids).
Posted by Shauna at 1:57 AM