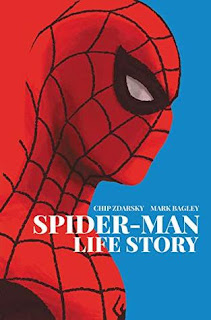 A friend recommended Spider-Man: Life Story by Chip Zdarsky and Mark Bagley to me a few months ago.  I didn't think the graphic novel was due out for awhile, but ended up pleasantly surprised when I found it at the library.  I don't think I've ever read a Spider-Man story before, so I wasn't remotely sure what to expect.

Spider-Man: Life Story follows the life of Peter Parker starting as a teenager trying to find his way in the 1960s all the way through until 2019.  Each issue (or chapter in the graphic novel) tells a story from a different decade of Peter's life.  Peter grapples with whether or not he should enlist in the Vietnam War, trying to balance work (both as Spider-Man and as a scientist and later businessman) and friends/family life (he has two children)through the decades, being pulled thinner and thinner as more and more things start demanding his time.  I wasn't really sure how I felt about the story at the beginning, but by the end I quite liked the story that Zdarsky and Bagley told (and the alternate world history that evolved from the presence of superheroes)..
Posted by Shauna at 11:45 PM