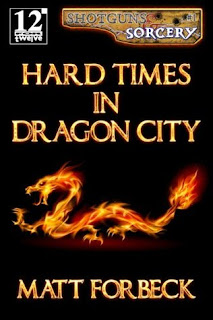 Note: this book review was originally written in a notebook on Dec 8/19 while I was on vacation last week.  I've made some minor edits to it while transcribing it.

Well here we are: over 7 years later, I finally read the first book of Matt Forbeck's second 12 for 12 series, Hard Times in Dragon City.  This trilogy is set in his Shotguns & Sorcery world.  I started reading it on my flight to Toronto last week (when I couldn't sleep on the plane); I ended up finishing it on the flight to Florida that day (with another hour of the flight remaining - Hard Times in Dragon City was a pretty fast read!)

Hard Times in Dragon City is another story about Matt Gibson, Forbeck's hero from "Goblintown Justice" and "Friends Like These" (although I admit I don't really remember much about him because it's been quite awhile since I read those stories).  The story begins with Max getting awakened from his bed by the elven guard captain, Yabair.  Some of Max's good friends have been murdered and he needs to identify the bodies.  From there, Max takes it upon himself to find whoever did this and bring them to justice, especially since he knows that the wrong man has been apprehended.  His journey takes him across Dragon City and beyond, visiting old friends and dodging assassins along the way.

I wasn't sure about Max at first, but by the end I quite liked him.  He's the kind of guy who has your back, and reminded me of the type of character I lik to play in RPGs: well-rounded in abilities (this comparison is quite apt as Shotguns & Sorcery was originally designed as a tabletop RPG).

The world is super fun too.  Max literally uses both a magic wand and a shotgun.  He even has to make snap decisions about which to use - can he pull off casting a spell fast enough? Can he pull out his shotgun before the enemy casts their spell?  The city itself is also a lot of fun, split into various sections for elves, halflings, dwarves, etc, and surrounded by a wall that keeps the undead out.  I hope a later book deals with the leader of the undead because she sounded quite interesting, too!

I also really liked how the story ended. Can't wait for more!

One thing to note though: Hard Times in Dragon City was written hurriedly as part of the 12 for 12 and it showed at times.  There were some minor mistakes all over the book (I even caught one spot where the book was originally written in third person rather than first, which makes me think an earlier draft must have been in third person).
Posted by Shauna at 10:46 PM