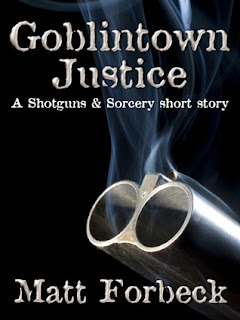 About 5 years ago, I backed Matt Forbeck's first 12 for 12 Kickstarter campaign. One of the stretch goals that got unlocked scored me the ebook version of Forbeck's short story "Goblintown Justice." "Goblintown Justice" is set in the Shotguns & Sorcery setting Forbeck had created earlier as a roleplaying game world (and which was the setting of his second 12 for 12 trilogy). To date I've only read his Brave New World trilogy out of the 12 for 12 stuff I backed. So while flipping through my Kindle stuff, I decided it was definitely way past time I read this.

"Goblintown Justice" finds Max Gibson embroiled in trouble. He leaves the Quill and discovers an orc he knows from his adventuring days standing over the corpse of a woman in the auxiliary city guard (whom both he and the orc knew from said adventuring days). The Dragon Guard arrives and arrests them both. The evidence is overwhelmingly against the orc. Max is released and instructed to find the killer fast if he wants to save his orc friend. So he heads down to Goblintown, the roughest neighbourhood in Dragon City, looking for answers.

This is my first experience with Shotguns & Sorcery; I was really liking the world. It's got crazy little touches, like the zombie horde outside the wall, that added to the already interesting mix of wild west and wizardry. The story itself was also rather entertaining, full of the crazy politics of Dragon City's diverse inhabitants. Honestly, I'm quite looking forward to reading the second 12 for 12 trilogy now (which I may get to in the near future...)
Posted by Shauna at 12:41 AM