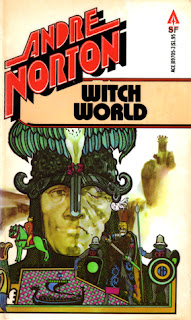 60's Fantasy is always an interesting read for historical value, but I often find it's a bit hard to get through.  That's exactly how I felt when I started reading Andre Norton's Witch World a few days ago.  I picked it up in a used bookstore not too long ago and decided to read it.

Witch World follows the adventures of Simon Tregarth.  Ready to make his last stand, he is instead given the chance to journey to another world, one where his mind and spirit will be at ease.  He finds himself on the moors of a magical world.  He helps a witch woman escape from some foes, and ends up joining her nation of Estcarp, where he fights in the Guards.  Unfortunately Estcarp has enemies on all sides.  Worst of all is the mysterious Kolder, who have some sort of Power too strong for the Estcarp witches to break through.  Kolder has been creating an army of zombie soldiers out of men.  How will Simon and Estcarp stop Kolder's advance?

One thing which I was sad about was how much Witch World jumps ahead in time.  The synopsis of the book had me thinking the plot would be about Simon finding his place in this world.  And yes, it's sort of that over a long period of time.  But when he first made it to Estcarp I was really interested in him trying to communicate with the other people.  But then it jumped ahead a few months to a point where he could communicate fluently with everyone; I thought that was a real shame.

I was also rather sad that the book followed Simon.  I found him a lot less interesting than most of the people around him.  Part two confused me for a bit when it switched to a completely different character for a few chapters; once I got over that shock, I found that I really liked her story.  But then it switched back to Simon and I was quite sad, especially since it never left his perspective again.  Don't get me wrong. Simon's a fine guy.  But he was one of those special chosen magical protagonists who got rather boring because of course he will survive everything and of course he's the only man in the world with the witches' Power.  I thought people like Koris, Loyse/Briant, and the unnamed witch (well, she was unnamed until the end of the book anyway) were all very interesting people who I would have loved to follow along with more.

I did find the Witch World itself to be a very interesting place (although I really wish I'd had a map while I was reading).  The many different cultures of people were varied and, to be redundant, very interesting.  I wish the book had gone into a bit more detail on all of them.

Likewise, the plot of the book was rather interesting.  I liked how no one in the world knew what exactly the Kolder were or how they worked.  So rather than having characters keeping information from Simon (and you the reader at the same time), you got to follow along as everyone pieced together what was going on.

I did find the ending to be rather abrupt though.  Koris saw through Briant's disguise suddenly and they seem to be together now; I'm not entirely sure how or when that really happened.  And the witch, in a rather offhand way suddenly gives Simon her name, they kiss then fade to black.  Like I said, very, very abrupt.

So that was my adventure reading Witch World.  I enjoyed it well enough and am glad that I read it.  But I have no real intention of continuing on with the series.
Posted by Shauna at 1:04 AM