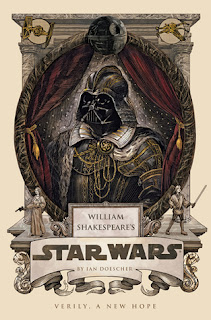 I've had William Shakespeare's Star Wars: Verily, a New Hope for a rather long time now on my Kindle. Life's been so busy though that I forgot it was there. I finally had some time to read it earlier today though; because it's written like a Shakespeare play I managed to get through it in a day.

So first, the good: this is Star Wars: a New Hope written in iambic pentameter. That's awesome!!! The dialogue was pretty amazing, and I loved a lot of the asides; the asides were super fitting and made what people said out loud much more interesting. Also, R2 D2 purposely pretending to only speak in beeps while being a Puck-style character was hilarious!

The bad: I did not like how Ian Doescher went out of his way to copy other Shakespearean plays. For example: at one point Luke starts talking to a Stormtrooper helmet like how Hamlet talks to Yorick's skull. I thought that was stupid and did not need to be there. Also, the Chorus was the most annoying thing ever. It made sense to be there at say the beginning when you would normally get the title scroll. But it would randomly show up in the middle of a scene, taking away from the hilarious dialogue. I hated that because it dropped you out of the action (even though it was often there to set the scene for the action). Also, in the majority of Shakespearean plays I've read, you get along quite well without the chorus - generally there's a few minor stage directions and otherwise characters tell you what's happening in dialogue.

So overall I'm glad I read William Shakespeare's Star Wars: Verily, a New Hope, but I didn't enjoy it as much as I thought I would. I love Shakespeare and I love Star Wars. Unfortunately the two together weren't quite as awesome as I expected them to be. :(
Posted by Shauna at 12:55 AM