"The Evil That Befell Sampson" and "Sins of the Father" 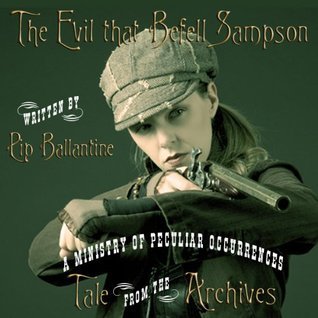 I think I got "The Evil That Befell Sampson" and "Sins of the Father" as part of the Ministry of Peculiar Occurences Kickstarter that happened last fall.  I haven't read any of the books in the Ministry of Peculiar Occurences books before, but I did like her Books of the Order and thought that if I ever did read the Ministry books it would be nice to have the later ones already.  So I had no knowledge of the characters whatsoever when I started reading these short stories.  Both stories seem to be prequels to the actual series.

"The Evil That Befell Sampson" follows Eliza D. Braun in New Zealand.  She is helping her fiance's mother with a suffragist matter.  Kate (her fiance's mother) has been the preeminent
suffragist in New Zealand.  Some of Kate's friends, who are also suffragists, have suddenly withdrawn their support.  Eliza goes to see one of the ladies and realizes that she has been mind controlled by a bracelet.  There's no time though to deal with that because Kate needs to get the signatures of hundreds of women to parliament in time.  But of course things don't go smoothly - the guy who mind controlled the older lady isn't going to let them get those signatures to parliament without a fight!

I have to say, this story was just ok.  For one thing, I got annoyed with it because there were a lot of stupid spelling and grammar errors in it.  The story also didn't really grab me, especially since Eliza and company sort of just dropped everything to get the scroll of names to parliament.  I know that it is important that they did this, but it seemed to happen a little too abruptly within the story.

While I didn't really expect it, I've now seen the motivation for Eliza moving to London.  I thought that was a really interesting event that really builds the character. 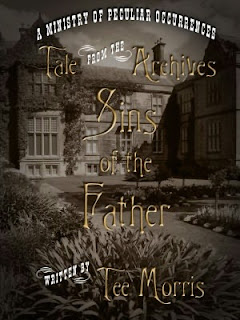 After that I read "Sins of the Father," which I thought was a lot more interesting.  "Sins of the Father" is written from Wellington's father's perspective.  The man had some grand design in mind for Wellington, but Wellington has turned his back on his father's plans and decided to forge his own path.  The father has some contingency plans that he will activate to bring Wellington back into the fold.

Honestly not a whole lot happened in "Sins of the Father," but that didn't matter because the story was so heavy with foreshadowing events yet to come.  This story, much more than the other, left me wanting to read the Ministry of Peculiar Occurences books at some point in the future (but definitely not now).
Posted by Shauna at 10:20 PM