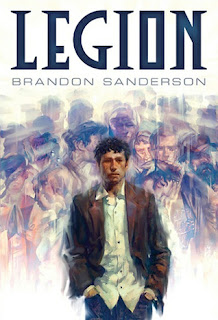 So now that I'm back home, I will fully admit - the reading spree I've been on lately has been while I was away on vacation.  The last 12 things I've read were all read while either in the airport or on a beach.  I even managed to read another four short pieces while I was travelling back home yesterday!  I wrote my thoughts down in a notebook after I finished each piece, so here is the edited versions of what I wrote.  :)

First I read "Legion" by Brandon Sanderson.  This was a super cool novella.  Stephen is a very special man.  He suffers from hallucinations of people, hallucinations which show up as he needs them.  Does he need the help of a historian?  Tobias is there for him.  Someone to help him defend himself?  There's J.C. the Navy SEAL.  Stephen has a mansion where each of these people have their own room because once they appear, they stay with him.

Stephen is approached by Monica, who works for a fancy research company. One of her employees, Razon, has stolen a camera that he created.  The camera supposedly takes pictures of the past.  So Stephen (and a few of his hallucinations) are recruited to track the camera down.  Their search takes them to Israel, where Stephen and company are convinced Razon has gone to either prove or disprove the resurrection of Jesus Christ.

One of the coolest parts was when Stephen flipped through a book on how to speak Hebrew and a hallucination appeared who could translate for him.  So depending on how exactly everything works, Stephen may have in reality flipped through the book and actually learned Hebrew!  He just has the hallucination taking over that part of his knowledge!  It was so cool! :)  (And if that's how things work, it means he's a ridiculously smart man!!!)

The other really cool part was when we find out why everyone keeps J.C. around. ;)

This was a super fun story that i really enjoyed reading!  Sanderson writes excellent novellas!  :) 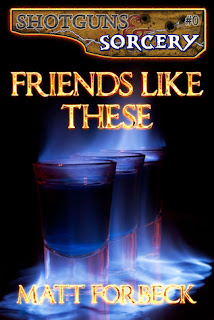 Next I read another Shotguns and Sorcery short story that I got from Matt Forbeck's first 12 for 12 called "Friends Like These."  This story involves some of the same characters that were in "Goblintown Justice" (notably Max and Kai the orc), along with a bunch of others.  This time, Max's halfling friend Moira has been accused of murdering an elf.  It's up to Max to prove her innocence once again.  This time he has to travel up the mountain to talk to the elves Moria had dealings with, so we get to see a few different parts of the city.  I enjoyed "Friends Like These" well enough, but I kind of think I liked "Goblintown Justice" a bit better. After that I read "Jewels in the Night" by Kevin O. McLaughlin.  I've never read anything by McLaughlin before and don't really remember why I got this short story on my Kindle.  It's about a small crew of soldiers boarding a Chinese spacecraft.  The Chinese ship just nuked the American lunar colony and was returning to Earth.  The Chinese ship was created in secret because the Chinese weren't supposed to have such a vessel.  The marines were the colony's defense but were too far away to stop the Chinese vessel when it attacked.  So the marines did the only thing they could do - they waited in suits out in space and attempted to latch onto the vessel while it came by to assault it.  There were seven marines attempting this; only four make it onto the ship.  No one has ever attempted such a thing before, so the Chinese crew were completely unprepared for the marines' assault.  The marines succeed in their attack, taking out the crew and sending the vessel back to Earth to detonate its remaining warheads on China.  It's a terrible choice, but the captain hopes it will end the war.

As terrible as this story was (specifically with all the nukes killing billions of innocent people), I really enjoyed McLaughlin's writing.  I'll have to look into his other work (or more of this series) in the future! 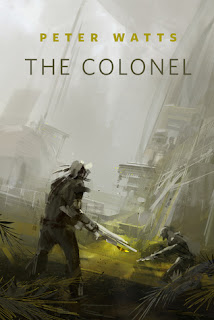 Finally, I read "The Colonel" by Peter Watts.  I don't remember getting this one on my Kindle either.  I have to say, this one was intriguing but I really wasn't a fan of Watts' writing style.  "The Colonel" takes place in the future of our world where people can band their brains together to create hive minds.  The Colonel of the title is very, very against them and has been fighting them for a decade.  As the story progresses, it is revealed that his son was sent out into space and was never heard from again.  So when one of the local hive minds gives him an unexpected clue, he decides to risk everything to find out more.

I assume this was some sort of prelude to a novel or something because that was where the story ended.  I was sad that there was no real resolution to anything as a result.  As intriguing as the world was, I highly doubt I'll read any more because I really wasn't very interested in it.

So that's the end of my vacation reading spree.  I managed to clean up a whole bunch of things on my Kindle, plus I read Witch World in the middle of everything, too!  And now we're at the end of 2016.  I don't have separate blog posts for everything (and I didn't bother writing a post here for a few books), but according to Goodreads I've read 73 things this year!  A good chunk of those things were either shorts (thanks to the last few weeks) or graphic novels (only 25 were actual books, be they short story collections, novels, or nonfiction).  I had hoped to make it through 20 of the anthologies/short story collections that I own this year, but that didn't happen (I think I read 4, and one of those was an accident; I've also got two others on the go but am not going to be finishing them any time soon).  But I just checked out this 2016 Reading Challenge which I printed off last December; it looks like I almost completed it!  Check it out! 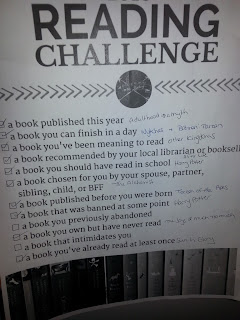