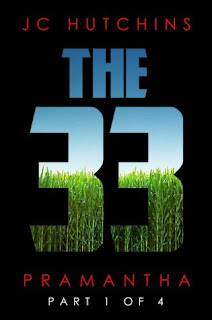 It looks like the next few weeks are going to be dedicated to me reading a bunch of things I bought on my Kindle and never got around to reading. Today I just finished The 33: Pramantha, Part 1 by J.C. Hutchins. I believe I bought it around when it came out a few years ago. I didn't remember what it was about at all, but decided not to care and just dive right in.

Addisson Creel made some crazy deal a few weeks ago, that he would have his past debts forgiven if he agreed to be on call for the next 33 weeks to help someone called Mr. Ins. There's a chance Mr. Ins won't call on Creel; should that happen he'd be free to do whatever he wished. But of course that doesn't happen; Creel wakes up to a mysterious voice in his head, which brings him to a farmhouse halfway around the world. There he is introduced to members of the 33 and informed he will have to help them save the world. Part 1 ends after everyone sits down and explains everything that's going on.

I really like the idea of the 33. Hutchins wrote it to be serialized kind of like TV or the initial release of The Green Mile, which came out in small parts. And there's a lot of interesting things going on in the story. What is Creel's secret? Who is Mr. Ins? What caused those people at the beginning of the book's weird suicide game? But I found that I didn't really connect with Creel, which is a shame; I'm honestly in no hurry to read more of the series. It is quite possible it will get better as it goes though, so I'm not completely against reading more in the future. It's also got a pretty good rating on Goodreads, so that may help to sway me in the future.
Posted by Shauna at 1:16 AM