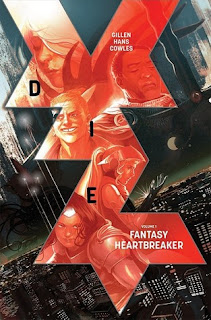 I discovered Die on the same day as We Stand On Guard.  Like that other book, I'd never heard of Die before.  Die was by Kieron Gillen, so I was definitely willing to give it a shot.  It also had a really interesting premise: "In the nineties, six teenagers disappeared into a fantasy role-playing game. Only five returned. Nearly thirty years later, these broken adults are dragged back to discover the game isn't finished with them yet..." (that's from the back of the book).  I'm sold!

And wow did Die deliver!  The art is gorgeous, and the story was fantastic.  The idea of 40-50 year olds being pulled back into the game from their teens that messed them up...and them now bringing the emotional baggage that they have gathered with them over their lives was fascinating.  The world itself was fantastic - it was a a familiar enough setting for a fantasy rpg, while also being uniquely different - I was super glad Gillen's essays on worldbuilding this comic were included!  I also loved the character classes - again similar enough to things you might know from D&D while being unique.  I loved the whole thing and can't wait for volume 2 (which is currently expected in about three months).
Posted by Shauna at 1:29 PM