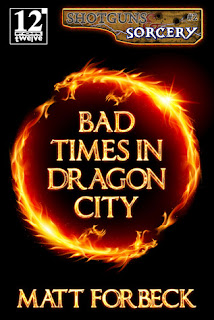 Note: this book review was originally written in a notebook on Dec 9/19 while I was on vacation last week.  I've made some minor edits to it while transcribing it.

Wow. So I wasn't super sure how I felt overall about the first book in this series (although I did enjoy it).  But the second book was absolutely fantastic!

Bad Times in Dragon City takes place about two weeks after End Times in Dragon City.  Belle calls Max to her home to tell him that her sister's body has disappeared.  For most people this isn't a big deal, but for elves it's huge: an elf family has to produce the body within a few weeks or else a living elf must takes the deceased's place.  And because elves consider their elders treasures due to their knowledge and long histories, elf families typically send younger elves to stand in the deceased's place.  So that means Belle will go if Fiera's body isn't found soon!

I loved that detail within the worldbuilding.  And I loved how it was dealt with: Max assumed an elder would go because that's how humans deal with it - elders are near death, so let the young live.

Fiera's body disappeared the night after she died, and the family's manservant, Ford, was found killed around where it should have been.  So Max is determined to save Belle by finding it.  But all the while he's being called across the city to meet with powerful dwarves and the Wizard's Council due to the dragonet (the dragon's heir) hatching and imprinting on him.

I didn't quite catch Max's leap in logic of how he realized Belle and Fiera's parents knew what had happened to Fiera's body, but their father had indeed seen it walk off.  So Max assembles the gang to go and find it.  Rather than simply being possessed by the Ruler of the Dead, Fiera had been in league with her for months.  And as everyone is facing off under the City, the enraged dragon tears through the ground, trying to kill them all.  This ends with Max killing the dragon instead, much to the delight of the Ruler of the Dead - the dragon was the only one keeping her at bay.  And so we'll see how the story ends in the next book!

There was some very neat worldbuilding in this book.  The dragon lives on magic, which is why he wants elf bodies - he devours the built up magic within them.  The other long-lived peoples would likewise have lots of magic for him, while shorter-lived races like humans do not.  I loved this detail.

But I did start questioning Max's tie to the dragonet vs. the dragon's tie to the elf (the Voice of the Dragon).  The latter pair seemed super tied, to the point that the elf seemed to suffer any injuries the dragon received (although I may have misread that and the elf may have simply been caught in the crossfire?  I'm not really sure).  If they are tied like that though, will the dragonet live a shorter life because he or she is tied to a human?  I'm also wondering if Max's personality rubbed off on the dragonet because they seem to be psychically linked?  Hopefully I'll get the answers to these questions in End Times in Dragon City!

One last somewhat unrelated note: as I was reading both this book and Hard Times in Dragon City, I kept reading "glowglobes" as "snowglobes," which are totally not the same thing!
Posted by Shauna at 11:00 AM