Oddkins: A Fable for All Ages 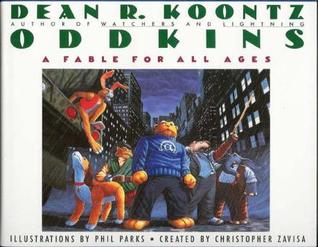 Note: this review was originally written in a notebook on Dec 11/19 while I was on vacation last week.  I've made some minor edits to it while transcribing it.

"Oddkins: A Fable for All Ages" is another story I've had on my Kindle for quite some time.   A friend of mine recommended it to me (or at least I think he did - he may have recommended a different Dean Koontz and I got this one accidentally).  I've never actually read any Koontz before and wasn't really sure what to expect.  When I first started reading "Oddkins," I didn't know what to make of it, but once I got into it I liked it quite a bit.

After a magical toy maker passes away, it's up to his creations to find his replacement.  But the forces of evil want to claim the toy factory for themselves; a group of evil toys from the hidden sub-basement awaken and seek to stop the Oddkins, while an evil toy maker arrives to buy the factory.

The Oddkins were a fun group: they were all unique, yet very loyal and good.  I loved how they got through their various encounters (like how Butterscotch talked down the mongrel, or Patch stood up to the alley cats), and how each of them had dreams beyond their initial purpose of helping their special children.

The squad of bad toys were really well done too.  Rex and the others were all rather terrifying in their own ways, especially for the Oddkins (but I felt it too).  I also liked how besides being malevolent, their lack of empathy meant they didn't really work together because in a way they couldn't.  That was a really nice touch.

I have to admit, I'm now quite curious about what happens to Viktor, the adult who saw the toys and had his world unexpectedly awakened as a result.  What does he go on to do now?

My one major complaint was that I found the story a bit heavy-handed at times, particularly at the end.  But overall, I thought this was a well-written good vs evil showdown, which I do recommend.  Just not necessarily to all ages - it's a bit dark for children in my opinion.
Posted by Shauna at 11:00 PM