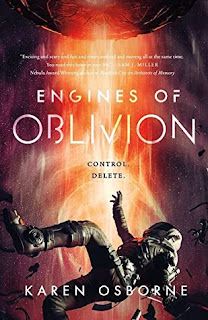 I've been excited to read Engines of Oblivion since finishing Architects of Memory a few months ago.  I've had it for a few months on my Kindle, but got caught up in the Divine Dungeon series, so put off reading this until there was a good spot to pause that series.

Engines of Oblivion follows Natalie Chan, one of the crew members from Twenty Five.  In Architects of Memory, Natalie, a soldier by training, had managed to become a citizen of Aurora, but lost many of her memories during the battle of Tribulation.  It's a year later and she's now the Director of Aurora's research and development team.  When the board sends her janitor indentures to pilot a new rig she designed, Natalie makes the split-second decision to pilot the rig instead because it is going into an actual combat mission (and the janitor indentures are not at all combat trained).  To her horror, Natalie discovers too late that the weapon within the rig was switched out for something far more deadly.

Called to a Board meeting after the demonstration, Natalie's loyalty to Aurora is called into question.  She is informed that she will be going on a mission back to Tribulation to locate Ashlan Jackson, whose heartbeat was detected.  Accompanying her is the one woman Natalie wants nothing to do with: Reva Sharva, the doctor who was the head of the Sacrament Society, and who had been experimenting on people in a secret lab on Tribulation; Sharva is being sent because she is the only one who can save Ash from the sickness she has (and Sharva has a bomb in her head that will detonate if she deviates from the mission).

This mission calls everything Natalie believes in into question.  Will she give up her friends to the company in order to keep her citizenship, even though she knows nothing good can come of turning them in?

I will admit, I didn't really like Engines of Oblivion at first, and that was largely because I didn't really like Natalie Chan.  And her being paired up with Reva Sharman definitely didn't help.  I also found the story a bit weird once the Vai got more involved.  On the one hand, it made sense for how the story went once they were involved (and I did like learning a bit more about them and how they worked).  But at times it got really hard to follow (especially once people were basically fighting inside each others' memories and minds, that got a bit hard to follow).  But by the end, I found that I really did care what happened to everyone, and, while in some ways sad, I really enjoyed the ending.

So while, in the end I did enjoy the book, I think I liked Architects of Memory better.  I missed the quirky crew dynamic of Twenty Five.  I also think this book might be better if read closer to the first book - while I remembered people and plot well enough as the book unfolded, it definitely would have been helpful if that first book was more fresh in my mind.