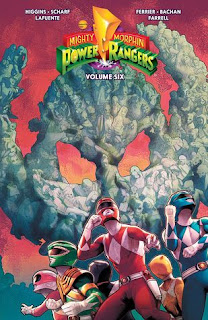 Mighty Morphin Power Rangers Volume 6 is the last one before Shattered Grid.  I wasn't really thinking of it as a bridge to that story line when I started reading it, as it was continuing the story of Finster's monsters who were disguised as humans.  The Rangers have agreed to work with Grace, a woman who was previously a Red Ranger for a somewhat disastrous mission (her team didn't train together or know each other at all - while they ultimately saved the world, three of them died, and as the Red Ranger and leader, Grace bears that burden even though it was Zordon's fault for sending the team in unprepared).  She has dedicated her life to making the world a safer place, building Promethea to accomplish that task.  Her people have discovered how to track the monsters when they're getting ready to transform, and so the Power Rangers agreed to work with her.
In good news though, Alpha Five and Saba have discovered how to return Zordon to the Command Centre!
Meanwhile, Rita Repulsa has returned from a mysterious errand.  She recalls Finster (that was a really neat scene - he was able to escape the pocket dimension basically whenever he wanted to, and the Rangers still don't know how he pulled it off!) and orders him to set off all his hidden monsters, forcing the Rangers to separate.  Unfortunately, she also made them all grow and their forms weren't able to take that, so the Rangers are able to easily defeat them.
While trying to track down the hidden monsters though, Billy returned to Promethea to boost their scanning equipment.  While there, he discovered that Promethea runs on very little power, but most of that power is dedicated to a particular wing.  Doing some sleuthing, he discovers the reason why: Grace had captured Lord Drakkon after the Rangers' last battle (he was pulled through the portal with them)!
And that's how we tie into Shattered Grid.  I'd forgotten that Drakkon had been pulled through the portal.  But by the end of this he was able to return to (presumably) his own dimension (with a headless Saba...) and start the events of Shattered Grid!
Posted by Shauna at 7:53 PM