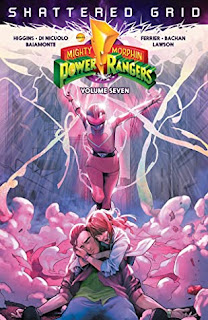 Continuing reading through the Mighty Morphin Power Rangers series of graphic novels at the library, I'm now at volumes 7-10, which cover the Shattered Grid and Beyond the Grid story lines, so these four were all rereads for me.  I wasn't sure what I would think of them on the reread (and after reading Masters of the Multiverse, which I seem to have forgotten to talk about on this blog - I loved it though, and will write about it when I reread it!)  But if anything, I actually enjoyed Shattered Grid more!  I felt like I had a better handle on all the characters this time around, and even caught a few things I missed the first time I read it!

And of course, unlike last time, I now know the events that led up to Shattered Grid.  I saw the first time the Rangers tangled with Drakkon, how he was being held by Grace's company, and exactly how he escaped.  So that definitely gave me a better grounding in the story than the first time I read it. 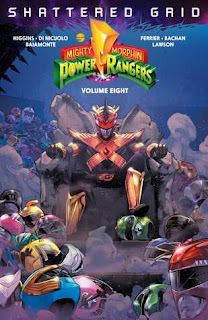 This read-through also reinforced just how much I love Lord Drakkon as a character.  The idea of an evil Tommy Oliver who remained with Rita Repulsa is just so good!  I love how very flawed he is, and how he just doesn't understand the other Tommy Olivers of the Power Rangers multiverse, and how they can all be so "weak" because of their friends (even though it is their friends who give them their power).  And even at the very end, he refuses to let anyone in and change.  He's such a fantastic villain, and Kyle Higgins did such a great job with all of his nuances.

But one thing that struck me on this time around was that the Ranger Slayer doesn't appear in the story at all prior to Shattered Grid.  I expected to see her in one of the earlier volumes with Lord Drakkon (and to see how she broke free of his mind control), but that didn't happen....but maybe that happened in the 2018 annual comic, which wasn't included in these volumes (that issue also included Lord Drakkon infiltrating a group to steal something from them - he shows Finster Five his spoils of war, but that's all I really know - it seems like that story took place between Drakkon escaping from Grace and Shattered Grid beginning).  I'm going to try to get a hold of that comic issue to see if that fills in the remaining gaps. 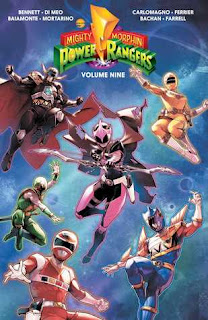 Likewise, Beyond the Grid was better the second time around, especially the beginning.  Knowing who Grace was seemed to help a lot - she was the Red Ranger for a team Zordon pulled together in the 60's.  Her team didn't know each other and had no training.  While their mission was ultimately successful, three of her team died.  She's carried this with her, and built everything from her company to her space ship to make the world a safer place.  She's also relentless in her belief that no one will be left behind.  It's knowing Grace that I think makes the beginning of Beyond the Grid a better read, even though the story is ultimately about the other Rangers with troubled pasts who come together into a team.

I also really like the friendship of the Ranger Slayer, Cameron, and Heckyl.  Kimberley and Heckyl in particular have similar pasts, and manage to find both forgiveness and friendship together.  I think that is one of my favourite parts of Beyond the Grid (especially the interlude where Heckyl explains his past - the three of them are having snacks together, and he specifically invited them to that little party to let them in on who he is, and they are both okay with him).  It ties beautifully into the whole theme of Beyond the Grid about second chances for everyone (and the right to choose a better path for everyone). 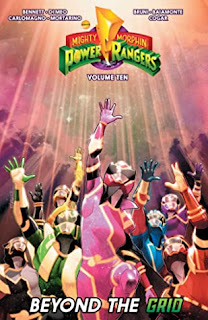 I'm now excited to read what comes next in the Mighty Morphin Power Rangers story.  What happens to the Rangers on board the Promethea?  Do they go back to their worlds without remembering each other?  Do they come together as a new team?  Hopefully volumes 11 and 12 will answer these questions!