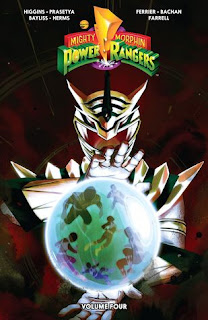 I'm very excited, as my local library now has Mighty Morphin Power Rangers volumes 4-12!  I started reading them last night, getting through volumes 4 and 5.

Volume 4 picks up where 3 left off - Billy and Tommy are in Lord Drakkon's world, having gone with Sabba to the Coinless. The Coinless, however, aren't taking any chances with these two in case they are Drakkon's spies.  But their leader, Zach, recognizes Sabba, who, when they last saw each other, had told Zach that he would return with the ones who would save their world.  Unfortunately, Drakkon tracked the sabre to the Coinless's base and mounts a full assault!

Meanwhile the other Rangers are trying to figure out a way to get the Command Centre back from Rita.  Finster finds Alpha 5's head, and reprograms it to lead the Rangers into a trap!  At Rita's behest, he's sculpted an army of Goldars, who are much more savage than the original.

Against overwhelming odds, the Rangers succeed, and even manage to find Billy's power coin!  Trini uses it and the Black Dragon armor to open a portal to the other dimension to Billy and Tommy, just in time to help against Lord Drakkon's forces!  The Rangers save the day, freeing both worlds from tyranny. 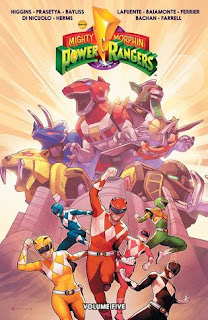 Volume 5 opens with the Rangers helping out across the planet.  Rita has been mysteriously absent for quite some time (which happens from time to time after a big loss).  So they repaired the Command Centre, and are working on a way to bring Zordon back (Sabba from the other dimension was accidentally able to find and anchor him, so it's just a matter of time before the sabre and Alpha 5 can get him anchored back to the Command Centre).  Jason is basically watching the world news 24/7 to deploy the Rangers where needed.  But on one of their missions, they are approached by a lady named Grace who asks their help - a pilot team went down while trying to look through what seems to be an illusion.  The Rangers arrive and discover a mysterious town run by Finster.  He's been taking some vacation time to work on his art - which means sculpting monsters that appear human until they're triggered!  After saving the pilots and capturing Finster, the Rangers get reports of two monsters rampaging across different cities - and both appeared human.  While they manage to deal with those two, they know it's just the start....how many monsters hiding as humans has Finster released into the world?

The story continues to be excellent, and I can't wait to see how the Rangers deal with Finster's invisible monster army in the next volume!