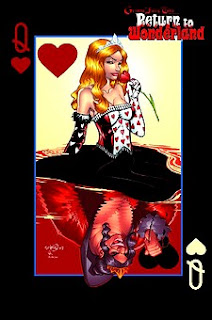 For my birthday, a friend of mine got me the Grimm Fairy Tales Wonderland trilogy. Before reading it, I decided to reread Alice's Adventures in Wonderland and to read Through the Looking Glass for the first time. Now that I have read both of those (and watched both Disney versions of Alice), I was finally ready to start reading the Wonderland trilogy.

Return to Wonderland is mainly the story of Calie Liddle, Alice's daughter. Alice herself is mentally ill and attempted suicide as the story begins. To help Alice recover, the doctor recommends that her family get her a pet: a white rabbit.

Calie comes home to find the place a wreck. Her mother is in tears, hiding in a closet, with her rabbit missing. Calie follows it into the basement where she falls into a hole and ends up in Wonderland.

But this Wonderland is a gruesome place. She finds the Carpenter and the Walrus (or what's left of him). The Carpenter then tries to kill her too. Escaping, she continues on the path, following rather closely to the path of Alice in Alice in Wonderland but everything has a gruesome twist (and is trying to kill her). Luckily Calie manages to escape with the help of her mother, but she returns to a rather darker home life. The madness of Wonderland is starting to bleed through to the real world, and nothing short of a human sacrifice will stop it.

Yes, it is dark and rather gruesome. But Return to Wonderland had an excellent story and I can't wait to read about what happens to Calie next!
Posted by Shauna at 1:01 AM