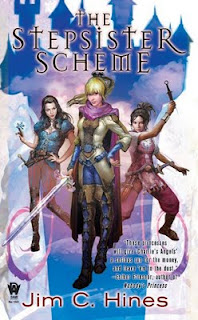 While wandering around Minneapolis I inevitably ended up in a Barnes and Noble. Browsing the new paperbacks, I found a book by Jim C. Hines, an author I had never heard of before. I wandered into the Fantasy section and found the first book in the series (The Stepsister Scheme), so I decided to buy that instead.

The Stepsister Scheme tells the story of Danielle Whiteshore (aka Cinderella). After her honeymoon with her prince charming (Armand), she is attacked by one of her stepsisters. The assassination attempt is ultimately unsuccessful, but the stepsister reveals that Armand has been kidnapped. And so Danielle, aided by Talia (Sleeping Beauty) and Snow (White) set off to rescue Armand. The Stepsister Scheme takes the girls all the way to Fairy Town as they track down Danielle’s stepsisters.

I really liked the three princesses. Danielle is a friendly girl trying to adjust from being a servant to now being royalty. Talia is a blunt fighter who distrusts almost everyone (most especially the fairies, with good reason). And Snow is a sorceress and a flirt , someone who takes innocent joy in almost everything along the way. It’s great fun to see the three of them interact, and to witness how their friendships grow throughout the book.

Hines does a great job of twisting the fairy tales we all know in a rather believable direction. This book is proof that the stories we all know may well differ from the “truth.”