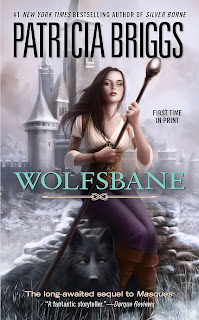 I've put off reading Wolfsbane for quite awhile now. I really enjoyed the first story of Aralorn and Wolf and was rather excited to start the second. But I've been busy working on other things (getting ready for a conference plus working on a video game) that I didn't really have time for it. And the few times I did, I decided to either read something else (like library books and graphic novels) or whatever else. But now, on my way to my conference, I decided to bring Wolfsbane with me. On the first part of my journey, a seven hour car ride, I started reading it. And I found I couldn't stop! Now in the hotel, I finished the final 40 pages last night (meaning I read the book all in one day!)
I love Aralorn and Wolf, and was really glad to return to their world and story. This time around, Aralorn has received word of her father's death. So after 10 long years, she finally makes her way home to pay her respects. Her family welcomes her back with open arms. Except for Nevyn, her sister's husband who hates magic (even though he himself is a magic user). He discovered that Aralorn was a shapechanger and has hated her ever since (which is why she has been uncomfortable returning home).
When Aralorn goes to pay her final respects to her father, she makes a shocking discovery: her father is still alive! He was ensorcelled as a means of luring Aralorn and Wolf back to her home.
As Aralorn and Wolf evade the traps set for them while trying to free her father, they are left with the mystery of who has done this to her father. And all of the clues lead toward Wolf's father the ae'Magi whom they thought they'd killed...
Wolfsbane is a fantastic story. It is yet another example of why I love the work of Patricia Briggs!
Posted by Shauna at 11:17 AM