Tales from Wonderland Volumes 1, 2 and 3 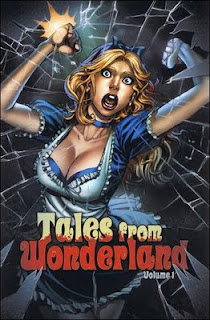 I bought all three Tales from Wonderland graphic novels when I was reading the Wonderland trilogy. I was originally planning a separate entry for each volume, but the stories are all interconnected in ways that don't make much sense until you have read the entirety of the Grimm Fairy Tales Wonderland series. So rather than trying to separate everything, here they are altogether.
Volume 1 has four stories, with one ("The Experiment") rather longer than the other three. The three shorter stories give the origins of the Queen of Hearts, the origins of Mad Hatter, and the story of how Alice "escaped" from Wonderl
and. The final story ("The Experiment") actually ties into the Queen story, and shows how the King of Hearts came to be. 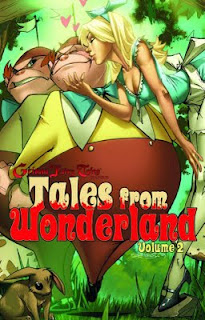 Volume 2 tells the story of what happened to the Cheshire Cat between Beyond Wonderland and Escape from Wonderland. During that time he was trapped as a house cat and taken in by a Japanese college student. This was a great story because it gives the origins of Lina, the girl with him who was never explained in Escape from Wonderland.
The story about Tweedle Dee and Tweedle Dum didn't make a lot of sense in the scheme of things until the end. It actually explained who exactly the Carpenter is. The story about the Red Queen was another really cool tale, but it didn't make sense to me until after I read "The Arrangement," which is the story of how Dodgson bargained with Wonderland to live through his illness. Finally, there was another Mad Hatter story. This one showed the Hatter at peace, and set the stage for his war against the Queen of Hearts. 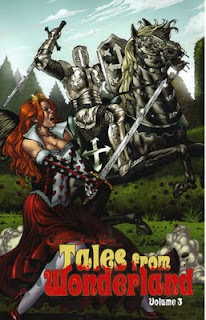 So that brings us to Volume 3. Volume 3 had a few more origin stories, starting with the White Knight, who becomes corrupted and finally serves the Queen of Spades. There is also the story of the Red Rose, who voluntarily went to Wonderland long before Dodgson made his bargain. Then we get the war between the Hatter and the Queen. And finally we see how Dodgson tried to break his pact with Wonderland all in the name of love.
As I said above, only after you've read all six volumes (the Wonderland trilogy and the Tales) do you really get the full story of Wonderland. So if you have any interest in the trilogy, be sure to give these a read as well!
Posted by Shauna at 2:33 AM