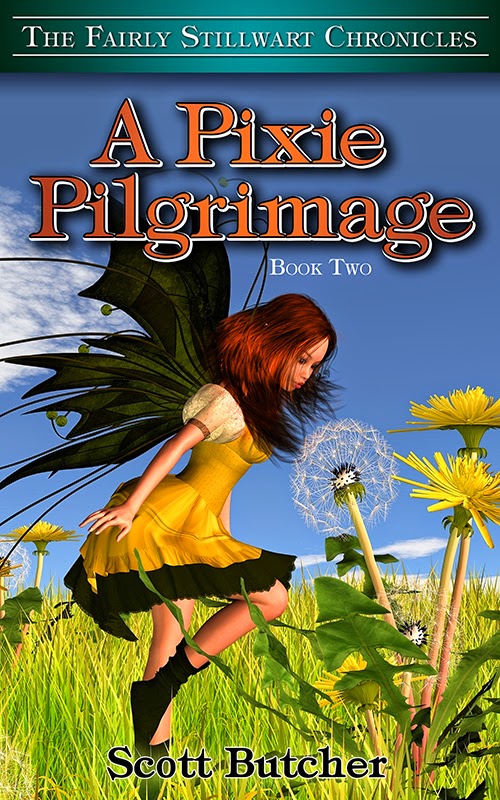 Today I read the second book in Scott Butcher's The Fairly Stillwart Chronicles, A Pixie Pilgrimage.  Like Stillwart and the Southern Fairies, book 2 was a super fast read.  I think I finished reading it in less than an hour.

A Pixie Pilgrimage picks up where the first book left off.  A pixie knight from the Northern Pixie Queen has arrived, informing Stillwart that she is a princess.  The Pixie Queen needs the fairies' help because her people are dying.  When pixies and fairies live together, both are strong.  But the Pixies have been without fairies since Fiona left them to track down the missing fairy grains.  Unlike fairies, pixies mourn their dead; without the presence of the fairies, these mourning pixies are following their loved ones into the afterlife.

Bellinda, Appleblossom, and Stillwart agree to help the pixies by bringing several new fairy grains to the Thorn Tree.  And so, along with the pixie knight and Mr Sooty the owl, they set out to save the Northern Pixies.

I really, really liked this story.  Where Stillwart and the Southern Fairies was more of an introduction to Stillwart's world, A Pixie Pilgrimage was a faster-paced adventure., feeling very much like where the story really begins.  Unfortunately it ends on a sort of cliff-hanger, meaning I need to wait for book 3 to find out what happened to the group on their adventure!
Posted by Shauna at 3:26 PM