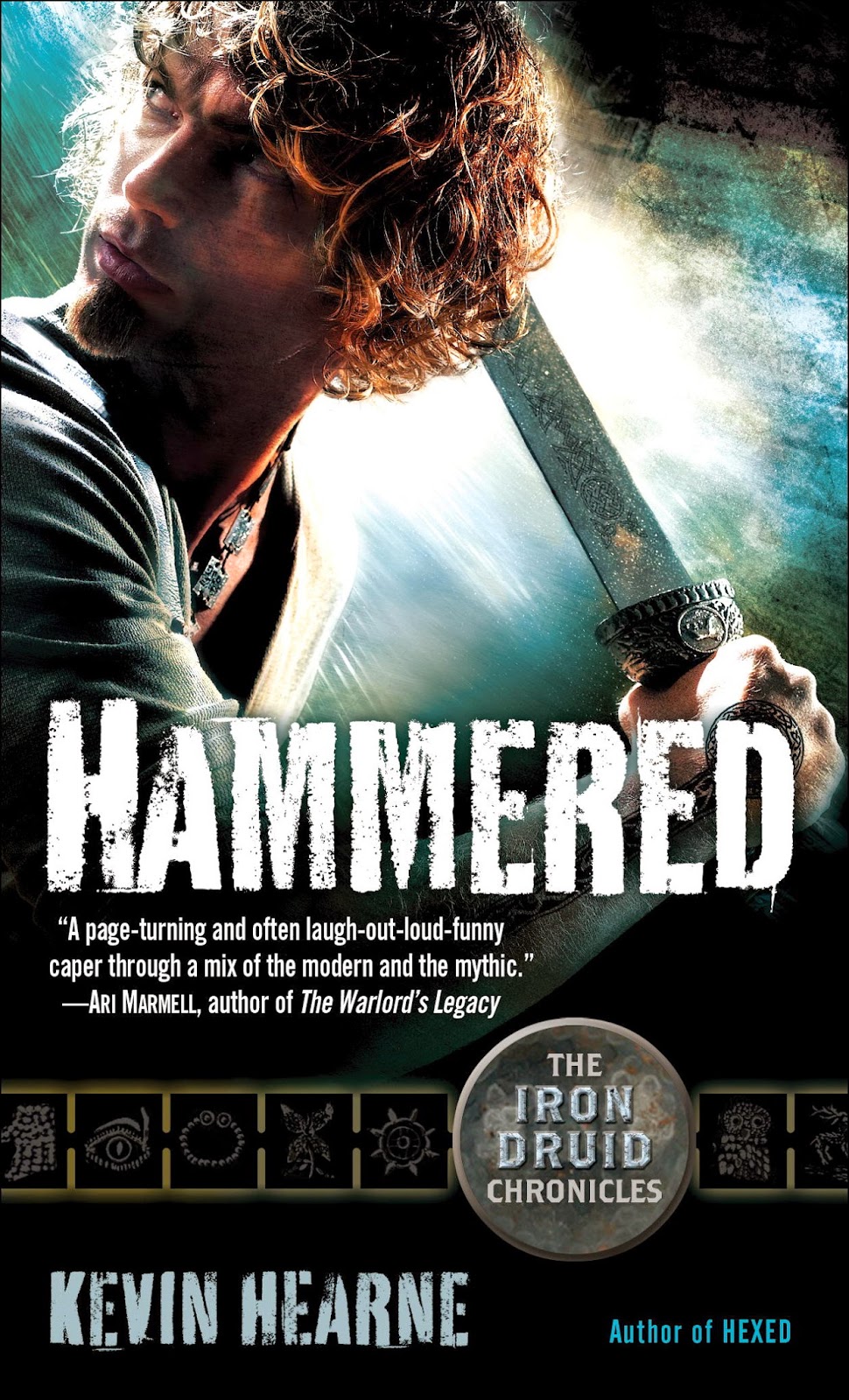 There seems to be a hold war going on at the library for Kevin Hearne's Iron Druid Chronicles.  I managed to get my hands on Hammered pretty quickly, but I only got it for a week (which wasn't a big deal seeing how I read it in two days).  I may have to wait a few weeks for the fourth book, Tricked (but we'll see!)

Hammered begins roughly where Hexed left off.  In exchange for Laksha's help in killing 12 of the Bacchants, Atticus has to steal one of Idunn's apples from Asgard; the apples preserve the gods' youth, and so Laksha wants one for herself.  Atticus also promised to help the vampire Leif kill Thor in exchange for some more help, and so the druid is treating the apple-snatching mission as a reconnaissance one as well.


Unfortunately things go horribly wrong right off the bat.  Using a hidden entrance into Asgard (which bypasses both the Bifrost Bridge and the god Heimdall) and befriending Ratatosk, the guardian of the back way, Atticus is attacked by the Norns upon entering Asgard.  The Norns accidentally kill Ratatosk and try to kill Atticus, but he slays them with Moralltach (Aenghus Og's sword).  From that moment on, Atticus knows he has to hurry; once the other Æsir discover the Norns are dead, they will start looking for their killer.

Atticus manages to get the apple without incident.  But on his way back to his escape route, he discovers Odin and some Valkyries are chasing him.  He manages to get away (and is happy to realize that the Valkyries' death powers do not work on him thanks to his amulet).

Back in Arizona, Atticus makes plans to leave town, knowing that thanks to his adventures in Asgard (and the planned killing of Thor), there are going to be a LOT of people and gods after him.  After making all of the arrangements, he meets up with Leif and Gunnar.  The three of them make their way to Siberia (where the backdoor to Asgard is located on our plane), where they meet up with the remaining three members of their group: Vainamoinen (a Finnish folk hero), Zhang Guo Lao (an immortal wizard) and Perun (the Russian Thunder god).  Together, the six of them recruit the help of the frost giants, then storm Asgard (even though both Jesus and the Morrigan have warned Atticus to abandon this foolish plan).

Just before Atticus and company meet the frost giants, they sit around a fire and tell each other stories to strengthen the bonds between them (this is so Atticus can move them all between the planes).  This was my favourite part of the entire book.  All five of Atticus's friends tell the story of why they want to kill Thor.  Hearne's writing here was absolutely amazing: all five characters spoke in their own voices and had very compelling (yet different) reasons for wanting to kill Thor.  I think my favourite was Vainamoinen's story; he befriended a sea monster, which Thor showed up out of nowhere and killed.  I really wish these five stories were available as standalone short stories on Kindle or something because I would love to reread them all.

Hammered was, in many ways, a very different book from the previous two in the Iron Druid Chronicles.  My one complaint was that there weren't a whole lot of women in the book (his apprentice Granuaile is in it for a bit, as is the Morrigan and Mrs. MacDonagh).  But no one in the group who wants to kill Thor is a woman).  Other than that though, I really enjoyed it.  And now that Atticus is on the run once again, I can't wait to see where book four takes him!
Posted by Shauna at 10:12 PM