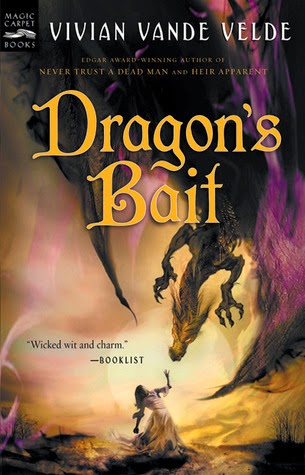 Vivian Vande Velde's Dragon's Bait caught my eye several weeks ago at work.  I finally sat down and read it today.  I read most of it this afternoon, then finished it off after work.

Dragon's Bait is the story of Alys, who is accused of witchcraft by her neighbours.  Her neighbour was after her father's land, and accused Alys of witchcraft after her father refused to sell.  During her trial, her father passed away, leaving no one to defend Alys (some of the villagers tried, but the Inquisitor confused them into believing she really was a witch).  Rather than burning her at the stake, she is sentenced to be used as a sacrifice to appease a dragon that's been seen in the area.  But rather than eat her, the dragon decides to help her get revenge on the people who accused her of witchcraft.

I honestly don't have a lot to say about this book.  While I liked Selendrile (the dragon), I found the book to be entirely too predictable. I also thought it was taking place on another world, and so got disappointed at how very Earth-like the setting was.  That may not be a fair criticism, but it's still how I felt.  That being said, Dragon's Bait was a fast read.  And I'm probably not the intended audience for it (it felt like more of a kid's book, even though the library marked it as young adult).
Posted by Shauna at 10:51 PM