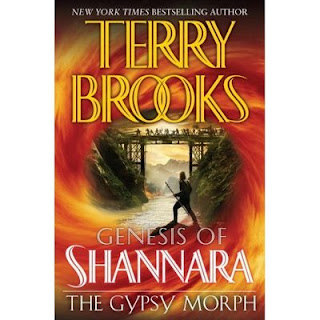 This one took me a little longer to read; I've been extremely busy all week, and wasn't able to read the way I did last weekend.
The Gypsy Morph picks up at the end of The Elves of Cintra. Angel Perez has helped the elves Kirisin and Simralin find the Loden Elfstone. Yet Angel was badly wounded, so in it up to Logan Tom to help the Elves save their city and the Ellcrys.
Meanwhile, the Gypsy Morph is getting as many people together as possible so that he can lead them to a place of safety against the coming destruction. He knows with certainty that everything that has happened to date will pale in comparison to the coming storm. He knows what he has to do, but he is operating almost solely on instinct, which is making people question him. But he is the world's only hope for a future.
The demons and their army of once-men lie in wait for the activation of the Loden, and also ready to chase Kirisin wherever he may go. Logan Tom has to help everyone, and hopes that the Word's promise of revenge will be fulfilled. And Angel Perez, now healed with the help of an elf, helps lead the children and protect the Gypsy Morph. The final book of Terry Brooks' Genesis of Shannara series brings everyone together, sometimes in very surprising ways! I enjoyed reading it, but overall I think my favourite of this series was The Elves of Cintra.
Oh, as an afterword, my copy of The Gypsy Morph has chapter 25 ending abruptly. The last sentence ends in the middle of a word! I'm not entirely sure if this was a printing error or what, but I have asked around on the internet for what page 285 is supposed to say. When I find out, I will let you know!
Posted by Shauna at 3:18 PM

It ends abruptly because... *spoiler*


He dies in a huge explosion.

He dies, in a huge explosion.

Yes, which is what I posted a few days later: http://booklistreview.blogspot.ca/2008/09/gypsy-morph-pg-285.html