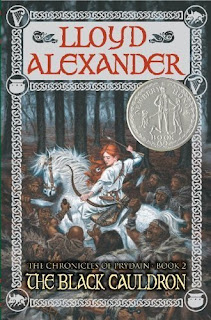 I started reading The Black Cauldron by Lloyd Alexander two nights ago. It is one of the books we're studying in Contemporary Children's Literature, so it is am extremely easy read. And I absolutely loved it! The Black Cauldron is a high fantasy, similar in some respects to the Lord of the Rings; there is a band of unlikely heroes who end up saving the world. But unlike the Lord of the Rings, The Black Cauldron can stand on its own.
The story mainly follows Taran and his friends as they search for the evil Black Cauldron. They must fight their way through the evil hunters of Arawn, survive the three sorcerresses, and all the time they have to be careful of whom to trust. Adventure and excitement at every turn of the page, this is an unforgettable adventure for everyone!
However, I do wish I had read the Book of Three, the first book in the Prydain series, before this one. The Black Cauldron alluded to events that had already happened, and talked about characters near the beginning as if they were people you knew. But once I got past the first couple of chapters, I found that this stopped and then the story was able to stand on its own.
All in all, I found The Black Cauldron to be an enjoyable read. It is simple, but highly entertaining. I think it is something that everyone, young and old, should get their hands on at least once in their lifetime!
Posted by Shauna at 4:16 PM