If I Were an Evil Overlord 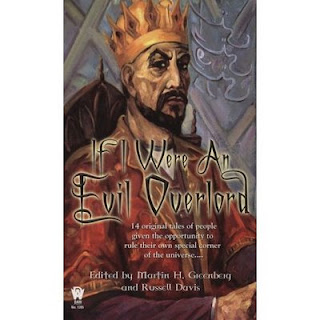 I have been reading this book on and off for at least six months. If I Were an Evil Overlord is an anthology edited by Martin H. Greenberg and Russell Davis. I picked it up on a whim one day while I was at Chapters. I like the anthologies Martin H. Greenberg puts together, and I really liked the sounds of this one. So, what the heck? I figured it would be a fun read.
There are fourteen tales in this book by fourteen different authors. They range from more serious to highly hilarious. Out of the fourteen, I really enjoyed eight of them (so that's pretty good for an anthology - I liked more than half of the stories). The eight I really enjoyed were the following: "If Looks Could Kill" by Esther Friesner, "The Man Who Would Be Overlord" by David Bischoff, "Ensuring the Succession" by Jodi Lynn Nye, "Loser Takes All" by Donald J. Bingle, "The Next Level" by David Niall Wilson, "A Woman's Work . . ." by Tanya Huff, "To Sit in Darkness Here, Hatching Vain Empires" by Steven A. Roman, and "Stronger Than Fate" by John Helfers.
The first three stories I listed were all read when I first got the book. "If Looks Could Kill" was hilarious, although it wasn't really about an overlord, but a hero's sidekick. The next two stories were what I expected of the book: stories of people who became evil overlords or who were overlords playing with their worlds, changing fate. They were both excellent.
The last five stories I listed were all read over the last few days. I've been studying for an exam, and I used this book as a study break: for everytime I went over my notes, I read a story. (It ended up being about equal: it took me about a half hour to read over my notes, and about a half hour to read a 20 page story). "Loser Takes All" and "The Next Level" both had to do with video games. They were both excellent reads. I especially liked "The Next Level" because of its weirdness. There were some things going on that didn't make a whole lot of sense, but it made for a good story (it also kind of reminded me of the game Assassin's Creed, which I recently played for the first time ever earlier last week). Tanya Huff's "A Woman's Work . . ." was extremely well written (well, I expect no less from Huff). It was a serious take of a woman overlord, and it was both excellent and inspiring (inspiring for a story, not for me to become an evil overlord). "To Sit in Darkness Here, Hatching Vain Empires" was also quite good. It featured an overlord who was a little too ambitious; he blew up the world accidentally.
The final story that I mentioned was one of the two that I read today at work. I almost got in trouble for reading it while on break; I couldn't put the book down and ended up a few minutes late getting back to work. "Stronger Than Fate" easily featured the best evil overlord out of the whole book. He magically managed to withstand everything, braving death itself to keep his empire within his own hands.
The other six stories that I mentioned weren't amazing, but for the most part they were still enjoyable. Most of them were a little too silly for my liking (I mean, who has rehab for overlords who have "lost their evil?"). But all in all, I thouroughly enjoyed this book. It was a great idea, and an entertaining read.
Posted by Shauna at 7:46 PM