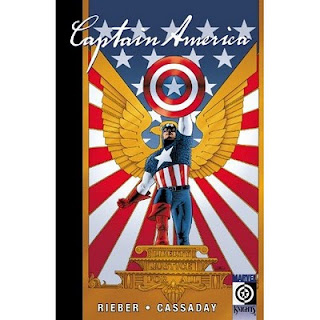 It isn't every day that I get to call something like this a school book. But Captain America: The New Deal is indeed on the reading list for my Literature After 9/11 class! And I was really lucky to find a copy locally - it's been out of print for awhile and will be reprinted in December of this year.
I don't know a whole lot about Captain America. To be perfectly honest, I think most of what I know (and my opinion of him) was formed while playing Marvel Ultimate Alliance 2 with a friend on Xbox 360. When all was said and done in that game, he seemed like a real jerk and I didn't really like him. And while my opinion hasn't really changed, it didn't stop me from enjoying this book.
Captain America: The New Deal has such a ridiculous concept: Captain America takes on terrorists! I kept telling everyone before I read it that I don't think the terrorists have much of a chance (unless there's some kind of super villain behind them). I don't want to give any spoilers here, so I won't discuss one way or the other what happened. But the basic plot is that several months after 9/11, a small town in the middle of the US is held hostage by terrorists. It's up to Captain America to save the day, defusing the bombs and rescuing the entire town. The story itself is very exciting, although there were a few confusing pages. Nick Fury appears, which is always a plus. And there was a really great sequence right near the beginning with Captain America searching for survivors at the Twin Towers' Ground Zero.
Like I said, it's a bit on the ridiculous side, but all in all Captain America: The New Deal was a really good read.
Posted by Shauna at 12:44 AM