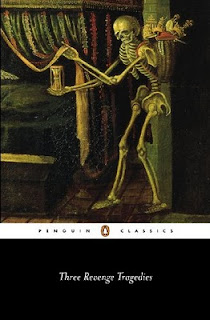 Today I read The Changeling by Thomas Middleton and William Rowley. It's the final play that was included in Three Revenge Tragedies. I don't normally like to do this, but I am going to talk about some very specific points in the plot (particularly the ending), so *Spoiler Alert* for anyone who plans on reading it.

I thought The Changeling was a really great read. Like The White Devil, it is about a strong female character, in this case Beatrice-Joanna. Beatrice is due to marry Alonzo by her father's orders within a few days, but she meets and falls in love with Alsemero. Deciding that she would rather marry Alsemero, she enlists the help of De Flores, her father's servant who is in love with her, to off Alonzo so she can be with the man she loves. But De Flores will not be bought off, but instead insists that she pay him with her virginity.

The most surprising thing about this play was the ending. The sub-plot involves two gentlemen who are respecitively feigning being mad and being a fool to gain the love of Isabella, the wife of the Doctor. They are found out, and the Doctor's man, Lollio sets them on a collision course to kill one another. At the same time, because they are both missing from court, they are blamed for Alonzo's death. Alonzo's brother seems ready to go after them in revenge. But none of that happens. Alsemero finds out that Beatrice was unfaithful to him, and he discovers with whom. The two confess to Beatrice's father and Alonzo's brother, but kill themselves before anyone else can make a move. And so they die, but bring everyone else back together.

While I did really like The White Devil, I thought the ending of The Changeling really put it apart from pretty much all of the revenge tragedies I have read so far. There wasn't a big pile of bodies at the end. Instead only the two who deserved death were dead at the end. And by dying by their own hands, no one had to be punished for seeking their own revenge. The Changeling was a fantastic play, which was well-worth reading. It was definitely one of the best out of this class!
Posted by Shauna at 7:07 PM