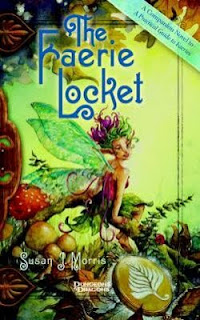 The Faerie Locket is a really quick, light read. I read it in one night while I was at camp. Keeping in mind that this is a story meant for a younger reader, The Faerie Locket is an all around fun story. At its heart it is the story of Jade becoming a hero, even when all the adults dismiss her because she is too young (and later for also being a pixie). My one problem with it came from a misunderstanding: when originally reading the plot synopsis, I thought it was a girl from "our" world that is brought to the Feywild. Instead it is a girl from a fantasy world who is transported to the realm of faeries which exists alongside her realm. Once I got over that, I found the book extremely enjoyable.
Posted by Shauna at 10:44 PM