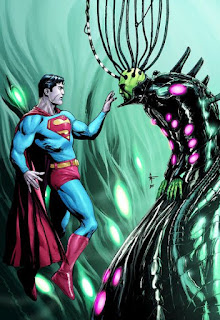 I don't normally read Superman books (with a couple of exceptions like the Superman Batman series) but I saw Superman Brainiac while at work last night.  I was intrigued by the premise so I took it out.

Brainiac is an alien who is collecting knowledge.  He shows up to a planet with sentient life, steals a city then destroys the planet.  He did this to Krypton and when one of his probes encounters Superman, he's on his way to Earth to do the same.

But Superman knows he's coming, and rather than wait Superman decides to take the fight to Brainiac.

There isn't a whole lot else going on in this story (well, there's some stuff with Supergirl facing her fears and believing in herself, and some character building stuff that probably goes with the larger overarching story) but it was a really good read.  The art was excellent as well.  So if you're looking for a quick read, particularly something that you can read without knowing a whole lot about Superman, this is definitely for you!
Posted by Shauna at 7:06 PM