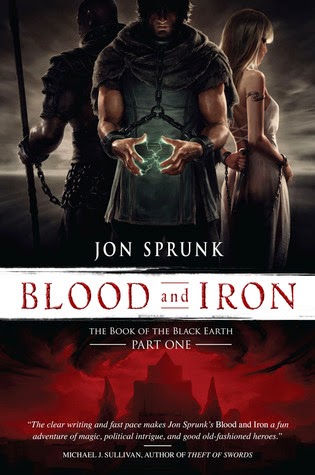 I finished reading Jon Sprunk's newest book, Blood and Iron, last night.  I won the book in a contest about a month ago, which was pretty exciting (I rarely win free books).  I couldn't wait to read it, particularly because I enjoyed reading his Shadow Saga.

Blood and Iron follows Horace, a shipbuilder who joined his country's crusading army as a carpenter.  When his ship is destroyed in a storm, he washes up on enemy land.  He is quickly captured (no surprise there - he is dressed differently than the locals and does not speak their language) and then enslaved with an iron collar.  Along with Jirom, a mercenary who was enslaved after fighting on the wrong side of a war, Horace is brought through the desert by his new master, who intends to gift the slaves to a temple.  But a chaos storm breaks out, and it is Horace who dispels it with magic he didn't know he had. Suddenly, Horace finds himself a free man, brought to the Queen's city of Erugash.  There he finds himself quickly elevated to the Queen's protector, where he now must navigate through the dangerous politics of the Queen's court.

Along with Horace, Blood and Iron follows the stories of a couple other people.  Chief among them are Jirom, the aforementioned former mercenary, and Alyra, a spy who is serving the queen as her personal slave.  The book also has several chapters from Queen Byleth's perspective, among other characters.

I found the world of Blood and Iron rather interesting.  I believe it is another part of the same world Jon Sprunk wrote for his Shadow Sage (people kept mentioning the Nimean Empire, which I'm pretty sure is where Josephine ruled).  Erugash was part of the Akeshian Empire, which seemed to be rather Egyptian- or Mesopotamian-like.  It was a corrupt Empire beset by a rather interesting religious divide (several cults were fighting each other in the Godwar, which happened before the events of Blood and Iron take place).  There was also a rather interesting magic system that the Akeshians had, using the four elements plus a fifth, rare element, the void.

But despite the interesting setting, I had a really hard time getting through this book.  It took about 70 pages before the story started to get interesting.  A guy washing up on shore and unable to speak the language isn't very exciting when the reader doesn't know what's happening, either.  I didn't really like Horace as a character, which made it even harder to believe that he could be this magical superman.  And I do mean that literally.  The magic system worked in such a way that practitioners get little cuts (known as "immaculata") when they use magic; the longer they are using magic at a time, the larger and more numerous the cuts become.  Horace doesn't have to worry about any of that though.  He is more powerful than the magic wielders who have been studying from birth, commanding that fifth element (which no one has been able to for hundreds of years) without fear of those immaculata.

I thought Jirom was an interesting character.  But his story wasn't that interesting to me.  He was sent to train for the Queen's army, becoming a disposable "dog soldier."  The training for the dog soldiers was practically death (many men were killed daily), but once these fearsome soldiers graduated into the main army, they were literally used as cannon fodder in a siege (which seems quite odd - why bother training them in the first place?  Just send them straight to the front lines!)  Jirom also ended up working with a group of rebel slaves who were rebelling against the queen and the larger empire.  This story might have been interesting, but without fail, Jirom's chapters showed up every time I was getting interested in things happening around Horace, making me resent them.

For her part, Alyra doesn't show up until around 100 pages into the book.  And I was never really sure what was going on with her (beyond that she was spying on things).  Which is weird to say; I knew Alyra's backstory pretty much right off the bat.  But I didn't get a good sense of what her spying was actually doing for anyone, herself most of all.

I was originally going to write something else about Byleth, but upon reflection, she was probably the most interesting character of the lot.  Byleth was powerful (being Queen), but weak (she was being forced into marriage, at which time she would become merely the wife of the king).  She seemed to be one of the bad guys (sending her own brother to be drained of his magic), but at other times she was a good guy (she cared first and foremost about her people).  I think she was a bit bewildering because it's very unusual to see such a well-rounded character, especially when that character is female.

Having thought a lot about Blood and Iron (especially before and while writing this review, I think a large issue is that too much was going on.  There were so many characters to jump between, that details got missed.  Like with Alyra, she and Horace started spending a lot of time together once she became his slave girl, but I felt like I was only told about their relationship, not shown it.  Or even when Byleth lets her brother's magic be drained - one minute the prince is in the court, saying he disproves of the enemy savage being in their ranks, and the next he's strapped to her vizier's strange device, accused of treason?  That didn't make sense to me.

And then there were other issues, like Horace's meteoric rise within the Akeshian Empire.  Why would the Queen make a foreigner her chief of security when he is just learning the language of the people?  How will he be able to navigate the deadly politics of her court when he can barely talk to anyone?

I really wanted to like this book.  Like I said, I loved the Shadow Saga.  Heck, Shadow's Son caught and held my interest from pretty much the first page.  And while Blood and Iron has some great things going for it (from the world to the characters of Jirom and Byleth), sadly, the story just never came together for me.
Posted by Shauna at 5:31 PM